UFC Fighter Luke Rockhold Rips Into Dana White’s ‘Belittling,’ Tells Him ‘F–k You,’ Suggests A Fix For The UFC 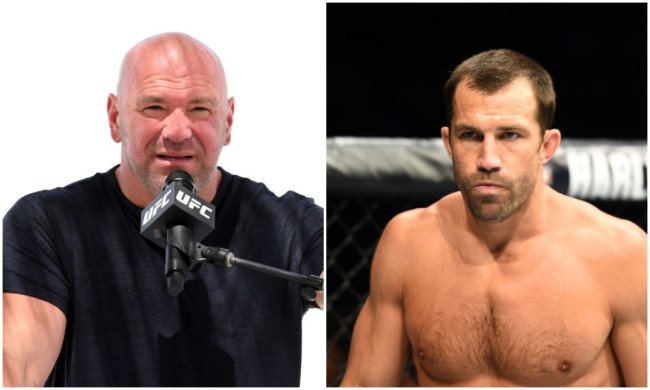 Former UFC Middleweight Champion Luke Rockhold joined Harold Varner III and George Savaricas on episode two of the Rippin’ It podcast and did quite a bit of ripping himself, as he fired off some serious shots in the direction of UFC President Dana White.

Rockhold has had an interesting professional career, which of course includes fighting and more recently modeling. Rockhold is the face of Ralph Lauren’s “Polo Blue” cologne, but has also been seen training with Khabib Nurmagomedov recently. When asked about his two very different worlds, Rockhold teed off on White explaining that the whole reason he got into the modeling world was to leverage himself after losing the Middleweight title in 2016 when White essentially turned his back on him.

“Fighting is like a mafia. They have these very mafioso-type tactics in negotiations, they try to f–k with you. I’m not having any of it,” Rockhold explained. “If you don’t know your worth someone will tell you your worth and it’ll be less than your worth, so know your worth. Once I lost the world title, Dana White came up to me and tried to beat me down mentally and I was like ‘f–k you,’ straight up. I was like I’m going to go do my own thing, if you’re going to try and offer me this and that bull–it, you know who I am and what I did, that’s the only reason I went out and got a modeling contract so I could leverage myself.

It’s clear that Rockhold’s plan worked, at least on some level, seeing that he’s fought three times since losing his belt in 2016, with his most recent fight coming in July of 2019 at UFC 239. It’s also worth noting that White and Rockhold have quite the history, White even encouraged him to officially retire not too long ago.

Rockhold, however, wasn’t done there when it came to giving his honest assessment on White. He went on to explain that White tries to “belittle” all the fighters despite not actually being a fighter. Rockhold also explained that when it comes to fixing any issues with the UFC, especially when it comes to negotiations, a governing body is needed.

“We don’t have the governing body. We’ve got an egotistical guy that’s a bit of a tyrant,” Rockhold said. “No one is going to try and fight you, you’ve got to put your ass on the line, stand your ground, take risk, otherwise you get treated like a b–ch. It’s unfortunate, a guy like that, he thinks he can fight, he thinks he’s a fighter. I don’t understand why he’s trying to belittle all the fighters when you’ve never fought a day in your life. You’re a promoter. We need a governing body to give people what they deserve, he doesn’t play the game right.”

Be sure to check out the full episode of Rippin’ It on YouTube below and subscribe to the show on Apple Podcasts, Spotify, and Anchor.