‘The Mandalorian’ Recap And Review: “Chapter 13: The Jedi” 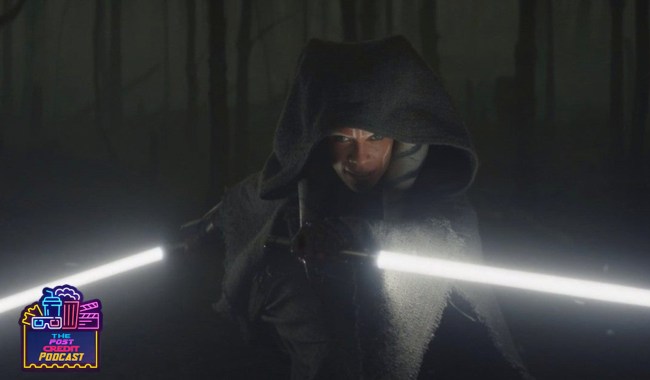 The Mandalorian came with the clip fully loaded this week, as Chapter 13: The Jedi delivered the debut(s) of beloved Star Wars characters, key information about Baby Yoda, and some incredible Lightsaber-involved set pieces. Essentially, Season 2, Episode 5 was everything you could ask for in an episode of The Mandalorian.

The Post-Credit Podcast, as we do every week, dove into our full recap and review on our latest episode, so make sure to check that out if you want to dive deep into all things Mando, Grogu, Ahsoka Tano, Grand Admiral Thrawn, and more.

With Mando now closer than ever to reaching a Jedi, Chapter 13 wastes absolutely no time introducing one, as the first scene consists of Ahsoka Tano cutting through former Imperial soldiers like child’s play in what was a truly thrilling display of Jedi power. The Mandalorian only had one chance to introduce lightsabers into the series and they hit it out of the park.

After Ahsoka gives Magistrate Morgan Elsbeth a day to surrender the city of Calodan, we’re reconnected with Mando, who touches down on Corvus and heads to Calodan as well. While there, Mando speaks with Magistrate Morgan Elsbeth, who offers him a pure Beskar spear in return for killing Ahsoka. Mando obviously accepts as he was planning on tracking down Ahsoka anyway. More on that spear later in the awards and categories.

Mando and Baby Yoda head into the woods where they finally meet up with Ahsoka Tano, who — after a brief showdown with Mando — speaks with Baby Yoda via the Force, learning his true name, Grogu, and where he’s been. At this stage, Ahsoka name drops the OG Yoda, saying that Grogu is the only other kind of this species that she’s ever met. It’s additionally revealed Grogu was raised at the Jedi Temple on Coruscant where he was trained by the Jedi prior to the fall of the Republic. After this, Ahsoka says, Grogu hid his powers in an effort to remain hidden, thus explaining his why his application of the Force is so inconsistent.

After allowing Baby Yoda to sleep through the night, the pair give him a Force test, leading Ahsoka to conclude that she should not train him as she’s worried that Grogu’s fear, anger, and resentment combined with the knowledge of using the Force could be dangerous, a la Anakin Skywalker. Mando pleads with Ahsoka, saying he was only hired to return Grogu to the Jedi and offers to help her take back Calodan if she’ll reconsider training him.

Mando and Ahsoka then storm Calodan, taking down Magistrate Morgan Elsbeth and her muscle and freeing the locals. Mando, with his brand new Beskar spear, returns to his ship to say goodbye to Baby Yoda only for Ahsoka to renege on their deal and reiterate that Grogu is best off with Mando, as the pair have developed a strong bond. She does, however, tell Mando what to do: take Baby Yoda to the ruins of an old temp on Tython, where he’ll be able to tap into the Force and see if another Jedi reaches back out. At that stage, if another Jedi does come and find him, he’ll be able to choose his own destiny: train with the Jedi or remain with Mando.

All told, “Chapter 13: The Jedi” was yet another season-high, as the introduction of Ahsoka Tano — who looked incredible, by the way, I was certainly worried about how she’d look in live-actin — and her Jedi abilities, the additional character development of Baby Yoda, and the third-act raid of Calodan that saw two of Star Wars most ruthless heroes team up for the good of the galaxy combined to distill The Mandalorian down to its more enjoyable form.

Ahsoka Tano kills five goons in the opening scene. Then, there are no kills until the end of the episode, where she and Mando go on a rampage in that Imperial-controlled town, icing another 25-30 people.

Awwww: when Mando leaves the city gates to go out to find Ahsoka, the magistrate’s right hand man looks at Baby Yoda, who’s chillin’ in Mando’s purse-thing, and asks what that thing is, to which Mando responds, “I keep it around for good luck.” Great line and adorable way to contextualize Baby Yoda.

“Holy shit!”: That Baby Yoda has a name! And that it’s terrible! Grogu?! They have one-and-a-half seasons to come up to Grogu? Outrageous.

The introduction of Ahsoka Tano is, put simply, absolutely massive. 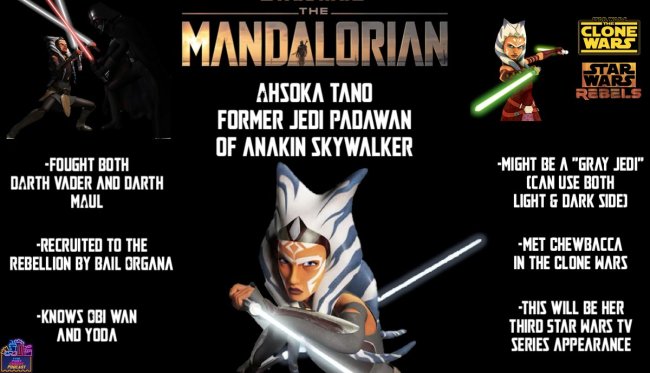 That brief yet electric duel between Mando and Ahsoka Tano when they first cross paths. Two of the galaxy’s fiercest warriors going head-to-head.

At the end of the episode, Ahsoka Tano reveals that she’s tracking down Grand Admiral Thrawn, who is an iconic villain in Star Wars lore.

Thrawn, a brilliant and ruthless Imperial strategist, was first introduced in the 1991 Timothy Zahn novel Heir to the Empire and is an Imperial military commander who took control of the Galactic Empire’s remaining forces five years after the events of Return of the Jedi. Despite being declared a “non-canon” character by Disney when they purchased Lucasfilm, the character was so beloved that he was reintroduced in the series Star Wars Rebels and was officially included in the newly established canon.

Thrawn faces off against classic Star Wars characters Luke Skywalker, Princess Leia, Han Solo, Chewbacca, and Lando Calrissian in the Thrawn trilogy (1991–1993), but is ultimately defeated. He is seemingly resurrected in the Hand of Thrawn duology (1997–98), and his backstory is explored in various other novels, short stories, comics, and video games in the Star Wars Expanded Universe.

Though Lucasfilm rebranded the Expanded Universe works as Star Wars Legends in 2014 and declared them non-canon to the franchise, Thrawn was nevertheless reintroduced back into the canon in the third season of the 3D CGI animated television series Star Wars Rebels, where he was voiced by Lars Mikkelsen. Rebels is set at a point in the Star Wars timeline earlier than Thrawn’s storylines in the Legends continuity and, as such, sees his defeat much earlier on, shortly before the events of the original 1977 film Star Wars. [via Wiki] 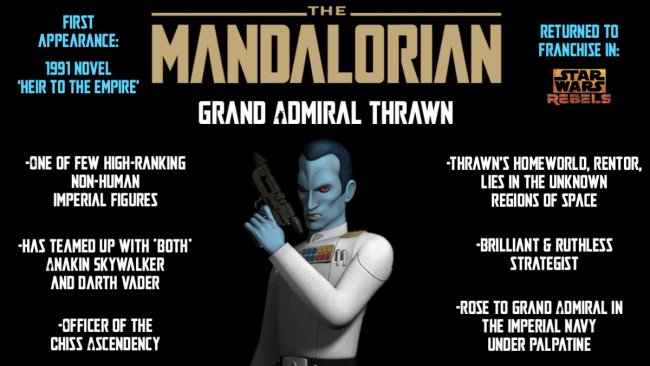 Mando was given a weapon this week that shall henceforth be known as Chekhov’s Beskar Spear. “Chekhov’s gun” is a long-established film tenant that states something introduced in the first act must be paid off by the third act. If you introduce a gun, it needs to go off — if you introduce a Beskar spear, it needs to be wielded. Now that Mando has this weapon, I predict he’ll use it in a 1 v. 1 duel with Moff Gideon and his Darksaber.

Beskar can defend against Lightsabers, huh? Sure that'll come in handy.#TheMandalorian pic.twitter.com/IF600WcTrx