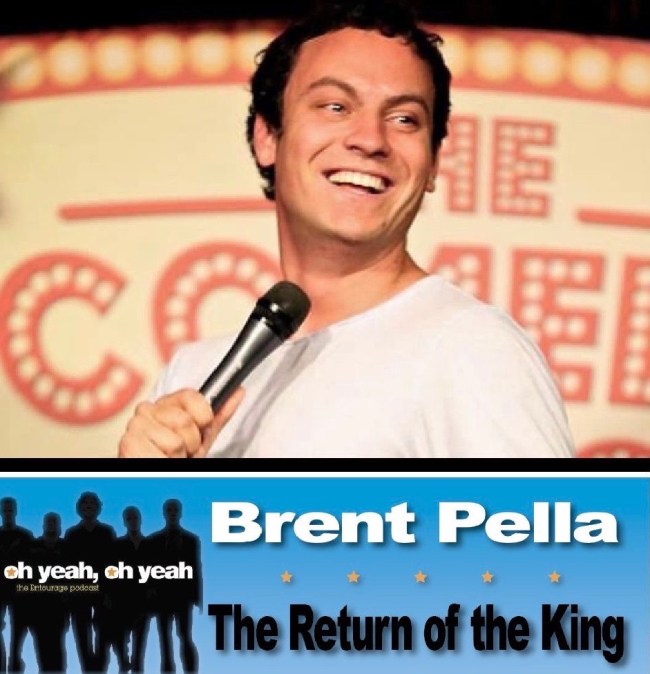 This episode is brought to you by CBDEE.com, the world’s largest one-stop shop for all your CBD needs. (They’re like Amazon for CBD.)

If you’ve spent any time on the Internet this past year, then you should be familiar with Brent Pella. Brent’s a comedian from Northern California who has gone mega-nuclear viral for his impersonation of Eminem.

His videos have reached the Number 1 most viewed videos on both YouTube and Reddit, and we’re massive fans of him here at BroBible. Here’s another one of his Earth shattering stand-up bits, about flying Spirit Airlines.

I was so pumped to have Brent join me on Oh Yeah, Oh Yeah: The Entourage Podcast last week to discuss the episode The Return of the King. In this memorable Season 3B episode, the boys take the day off to unwind at the racetrack and Ari races temple to temple on Yom Kippur to try to lock down the ‘Medellin’ role for his ex-client Vince.

Most people remember this episode for the Ari plot, which Brent and I discussed in detail. However, it was the horse subplot which Brent had the best take of the episode. For years, I’d always considered the one-off arch of Drama saying his favorite racing horse from the glue factory to be a little random and unnecessary.

It was Brent who pointed out to me that it wasn’t Drama saving his favorite horse, but Drama saving himself from being given up on. His pilot is about to premiere in next week’s episode and this is realistically his last shot at what he’s always wanted. And this is why I love doing this podcast every week – finding symbolism in episodes of a show I’ve watched dozens of times over the past ten years.

One of my favorite weekly categories is How Would This Episode Be Different in 2019, and Brent and I had a few good ideas here.

Make sure you take a listen below, and leave a 5-Star review if you’re enjoying the show!