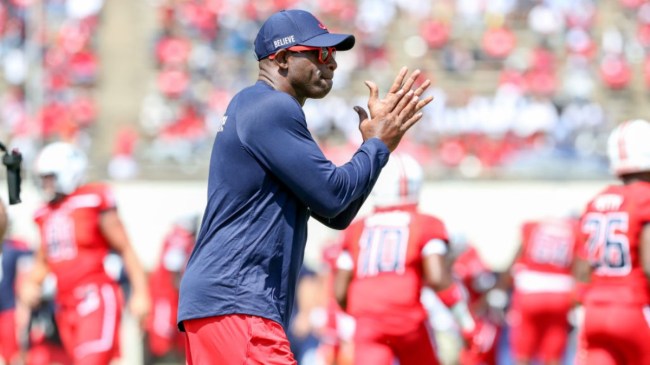 Early on in the new college football season, Deion Sanders has emerged as the big name for schools to pursue when their head coaching position opens up.

He has already proven his skills as a recruiter and turned Jackson State into one the stronger teams in the FCS this season. With the way he has been building that program in his first few years, it was only a matter of time before he started getting attention from some schools in the FBS.

Today, college football insider Bruce Feldman revealed a couple of schools that could be interested in his services next season. One of those is Georgia Tech, whose job recently opened up.

“Deion Sanders is a name to watch.” @BruceFeldmanCFB shares the latest news on schools with Head Coach vacancies that are interested in the Jackson State Head Coach ⬇️ pic.twitter.com/lC9dBKHNdy

With Georgia Tech’s job coming open this week, Deion Sanders is a name to watch,” Feldman said. “You’re talking about a guy who was a big star with both the Falcons and the Braves. He would make that program immediately relevant nationally and pump a lot of much-needed life into that place.

The other is Auburn, whose head coach is currently believed to be on one of college football’s hottest seats.

Bryan Harsin is on the hottest seat in the country at Auburn, and I’m hearing Auburn may target Deion Sanders. You’re talking about a guy who is in all these commercials with Nick Saban that you’re seeing every week. You’re talking about a guy who showed his recruiting prowess last year by beating everybody, including Nick Saban, for the No. 1 recruit in the country, Travis Hunter.

Wherever it is that he ends up, it is beginning to look like a certainty that Deion Sanders will be coaching a Power 5 program in 2023.