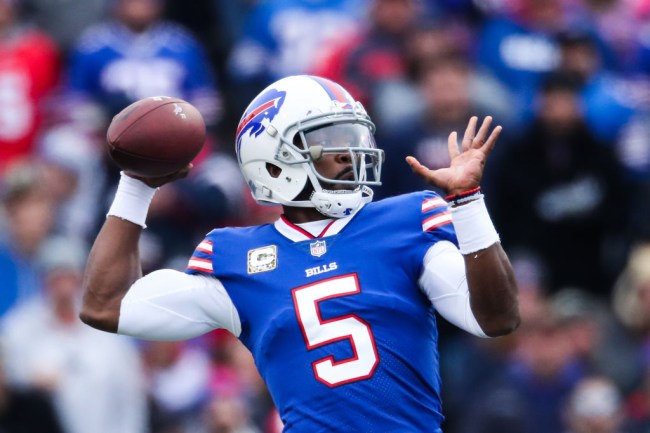 Thanksgiving week is always a fun football week. You’re potentially holding your own turkey bowl over the weekend back home with your high school friends. You get to stuff your face and your fantasy lineup on Thursday with three games on the schedule. At least all the bye weeks are over, so you don’t have to worry about finding talent this week. Your lineup should be stocked and ready to rock.

The Bills made one of the worst decisions ever when they benched Tyrod for Nate Peterman. Peterman ruined the pants that he was on his way to return as he threw five interceptions at San Diego before getting benched. Now Taylor’s back in the saddle going against a defense that has allowed 18 fantasy points a game to opposing quarterbacks. Buffalo’s defense has been awful in recent weeks, so Tyrod will be chasing points the entire game.

We’re diving deep for this one, but the situation is too good to ignore. McKissic is seen as a pass-catching running back, but Seattle’s RB situation is in shambles. They pulled Mike Davis off the practice squad to start last week and decided Thomas Rawls wasn’t good enough to be active. Davis is now hurt, and someone has to see touches against San Francisco this week. The 49ers are giving up the most fantasy points to RBs this year so McKissic should at least get a solid piece of that pie.

Sanu hasn’t seen that many yards in recent weeks, but he’s finding the end zone. He should do both this week against the 28th ranked pass defense according to Football Outsiders. Matt Ryan clearly likes to evenly distribute the rock as Julio Jones hasn’t taken off this year, so Sanu will get his share on Sunday.

Matthews has rounded into form in recent weeks and the party will continue this weekend. Indianapolis pass defense is brutal as is evidenced by their ranking of 27th by Football Outsiders. Matthews went for a solid four catches for 69 yards in their first contest this year and should improve on those numbers in round two.

For Christmas, all Giants fans are asking for linebackers and safeties than can cover tight ends. Last week the Giants finally broke up their streak of nine straight game of allowing a touchdown to a TE, but they still got crushed by Travis Kelce. Look for them to get crushed again by Vernon Davis after you’re done with your pumpkin pie.

Prescott’s owners will feeling good when Zeke got suspended because they figured Prescott would be throwing it around like Dan Marino. Unfortunately, the injury to Tyron Smith has forced Prescott to run for his life most of the team and his numbers have suffered dramatically. The Chargers have only given up more than one passing touchdown in three of ten games this year and have only given up one 300-yard passing game all year. It might be time to give Prescott a break in your lineup.

Mixon got his opportunity against Cleveland a few weeks ago and fell flat on his face. Cincinnati will want to attack Cleveland through the air again. The Browns have only given up four rushing touchdowns all year and have the top ranked run defense according to Football Outsiders. All this shapes up to mean Mixon will bust again.

Powell set the trap for all of us two weeks ago and we all got screwed. The Jets clearly would rather give Elijah McGuire work over Powell. Split or not, Carolina has the third best run defense according to Football Outsiders so there won’t be much success with whoever the Jets give the ball to this weekend.

If Dak isn’t going to play well then his receivers will likely falter as well. Bryant will also suffer as his shadowed by the Chargers best cornerback, Casey Hayward. Hayward has only allowed 100+ yards in one game this year. Since Dallas doesn’t move Bryant into the slot, he’ll likely see plenty of Hayward. Cobble all that together with the fact Bryant just isn’t producing like he used to (only four touchdowns on the season and no 100-yard games), we’re not sure what will put you to sleep first as a Bryant owner on Thursday between his performance and the tryptophan.

Jones has been extremely productive in recent weeks, delivering in a way that his owners from last season were hoping he’d produce. That’ll change this week as he goes head to head with one of the best young corners in the league, Xavier Rhodes. Rhodes won’t go into the slot to cover Golden Tate, but instead will lock down Jones on the outside.

ASJ was a revelation in the middle of the season, but his production has definitely decreased as defenses key on him a bit more. With Carolina preventing TEs from scoring touchdowns in seven of 10 games and haven’t given up 100 receiving yards to the position all year. Robby Anderson has taken over recently and will likely have to do so again because ASJ will likely be stunted.