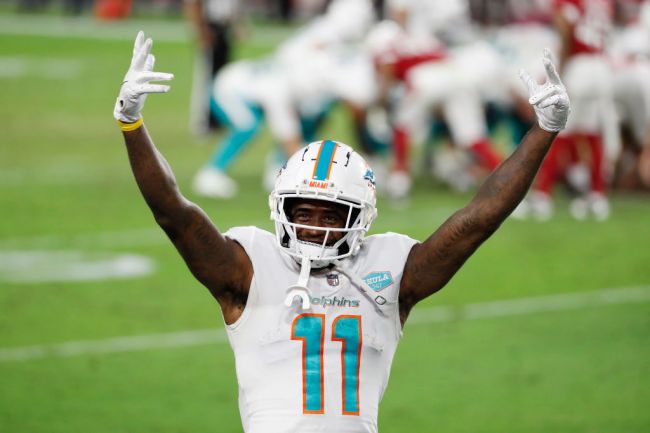 It’s Week 13 in the NFL and it’s the final week of the fantasy football regular season. I hope you have a playoff spot locked in and this is a week to relax on Sunday, sit on the couch with some spiked egg nog, and nap by 2:30. If you need a win this week, we’ll sweat this out together, drink some spiked egg nog, pass out by 2:30, and hope we wake up with a win. Before that, let’s look at who you should start and sit this week.

Fitzmagic brought his big beard and those short shorts right back into the starting lineup and back to fantasy relevance. With Head Coach Brian Flores saying Tua Tagovailoa’s thumb injury could have him out for multiple weeks, Fitzmagic is a great streaming option against the Bengals who have allowed 22 passing touchdowns this year.

The Raiders went into the game against Atlanta with the same attitude as a college kid who thought just attending class would be good enough to get an A on the test. I believe this was just a one-off, Derek Carr and this offense should rebound against the Jets who have allowed a top nine quarterback in four straight games.

Rivers is beginning to throw the ball more as of late and now has at least 18 fantasy points in back-to-back games. I’m expecting this game to be a shootout, Rivers is a good streaming option this week.

If Julio Jones isn’t on the field then Matty Ice shouldn’t be in your lineup. Ryan isn’t able to produce without Julio, just like how J.C. Chasez can’t produce a music career without NSYNC. We saw how lost he was against New Orleans two weeks ago, I’m expecting the same results this week.

The inconsistency of Goff makes him as tough to trust as my wife when she says she’s almost done getting ready, it’s actually me that always says that, but this is fantasy football so I’ll create fantasy scenarios. I would consider streaming him on two quarterback teams or a superflex, but not as a QB1 if I need a win to get into the playoffs.

Hump day, am I right? I know these weeks all blend together now, but remember going to work on Wednesday and knowing you still had two full days after that? Now imagine having grown men trying to knock you down repeatedly that day? Big Ben must have had the hump day blues last week but actually much earlier this week as he struggled against Baltimore. This week’s opponent is just as tough as Washington is allowing the tenth fewest points to quarterbacks this season.

Last week Monty had the best game of his young career; he was explosive, and even with a negative game script, he stayed involved with his pass-catching ability. He should remain in your lineup as not only are the Lions allowing the most rushing touchdowns but the most receiving touchdowns to running backs.

He now has five straight games hitting the end zone. With Colt McCoy at quarterback, the Giants are going to rely on the run to move the ball. Gallman is a high-volume upside RB2 this week.

I’ve probably watched ‘Coming To America’ more than any other movie. If I wanted to, I could make a whole starts & sits article with references to the movie, maybe in 2021. Anyway, the scene in the barbershop when they’re talking about boxing and they say Joe Louis is 137 years old, Frank Gore is the Joe Louis of football. He’s out there at 255 years old, strapping up the pads and taking hits.

With Gore leading this backfield he has back-to-back double-digit games, that’s why I like him as a flex option against the Raiders who have allowed the fourth-most points to running backs this year.

Starting a rookie running back not named James Robinson is not fun, like getting socks for Christmas not fun. Moss is just another rookie runner that hasn’t been able to take over his respective backfield. With Devin Singletary still being a thing and Josh Allen taking runs in the red zone for himself, this makes it tough to play Moss against a 49ers defense allowing the seventh-fewest fantasy points.

There’s a reason why Bernard is in his eighth season with the Bengals and has never been the long-term starter. He’s put together consecutive productive games, but he’s never been able to sustain it. He hasn’t had a 10+ fantasy performance since Week 8 and has one game with over 50 scrimmage yards in his last three. I can’t trust him in what’s turned into a good Miami defense.

This Rams backfield gets more confusing every week as Cam Akers has all of sudden come back to life. Henderson has not looked good by averaging just 2.08 yards-per-carry in his last three games. Arizona has been good against the run this season, the two rushing touchdowns they allowed against New England last week were goal line runs from James White, and the Rams use Malcolm Brown in those situations.

Cooks has been a strong start over the last few weeks, but now with Will Fuller suspended for the rest of the season due to a positive PED test, he becomes the number one. It’s a tough matchup this week against the Colts, but Deshaun Watson has been playing out of his mind as of late and it’s hard not to trust him getting it to his receivers.

Tua and Parker never had a good connection, but with Fitzmagic back, he had over 100 receiving yards for the first time since Week 4 last week. The Bengals have allowed seven touchdowns to wide receiver in their last four games, most in the league, I see Parker hitting pay dirt this weekend.

Philip Rivers has thrown the ball more as of late and Pittman has been his favorite with seven targets in three of his last four games. This is a Houston Texans defense that has allowed the third-most touchdowns to wide receivers this season.

A few weeks ago this was a no doubt, slam dunk start, back when we slamming down pumpkin spiced lattes and doing the Monster Mash. Things have changed, the Seahawks secondary has played better the last couple of weeks, containing guys like Cooper Kupp and Deandre Hopkins. Slayton has struggled with Daniel Jones, and now with Colt McCoy at quarterback, Slayton should stay on your bench.

Kirk is like the bassist in the band; he’s essential, once in a while you have to give him a solo, but no one is begging for his autograph. Kirk got his bass solo for a couple of weeks while Deandre Hopkins was backstage, but Kirk is fading in the background once again. You can’t trust him against the Rams who have allowed the fewest points to wide receivers this season.

I think we can return to calling him Big Bob. Tonyan has found the end zone the last two games and the Eagles defense has allowed six touchdowns to the position, which is fourth-most.

The Eagles offense is bad, but Goedert is the only player that has stayed productive. I know Zach Ertz will return to the lineup, but Goedert has been able to be fantasy relevant alongside him in the past.

I remember drafting Kyle Rudolph at a Buffalo Wild Wings the year he helped me win a championship, in 2016, that was also the year when the Chainsmokers had a bunch of hits, so we’re done reminiscing now. Rudolph played well last week with no Irv Smith Jr. and he is poised to have another good game with the Jaguars are allowing the most touchdowns to tight ends this year.

Thomas did it all last week; he had passing yards, rushing yards, a receiving touchdown, and pretty sure I saw him baking a pie in the third quarter. This week I can’t expect that same production against a great Steelers defense allowing under five points-per-game to tight ends.

Remember when Jimmy Graham was leading the league in red zone targets? Pretty sure the leaves hadn’t turned yet. This revolving door of quarterbacks hasn’t helped, Graham had four touchdowns in his first five games, but only has one in his last six. I can’t start him against the Lions who are allowing the second-fewest yards-per-game to tight ends this season.

I hate to pick on Fant, but even in a year with very few options at tight end, you can’t have Fant in your lineup.