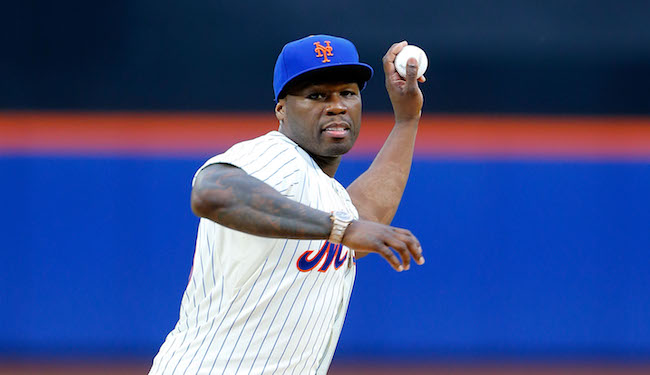 On May 27, 2014, 50 Cent took to the pitcher’s mound at Citi Field to throw the opening pitch before a Mets game against the Pittsburgh Pirates. He stared down the catcher for a few seconds before winding up and throwing what might be the worst first pitch in the history of baseball.

Fiddy narrowly avoided nailing a cameraman— unlike the guy who managed to hit one in the balls at Fenway Park last summer— but at least that dude managed to get it within the general vicinity of the plate. While the Sox fan can take solace in the fact that his blunder will eventually be lost to posterity, no one will ever forget the historical inaccuracy of the Queens native.

Shortly after the incident occurred, 50 provided a joking explanation for why he missed as badly as he did, but while recently speaking with Newsday, he finally gave a straightforward answer to explain what really happened.

He blamed the pitch on nerves, saying:

“I’m like, this is what happens when the fanfare and the energy of the people is involved and you start trying to get fancy and try to throw the ball harder than you have to,” he said. “It just was the worst pitch ever . . . I had pitched before. I rehearsed. I practiced. I threw the ball a little bit.

“I was throwing like, ‘Oh, man, I’m about to throw a strike, a hundred miles an hour.’ But that shit damn near killed a cameraman!”

50 says multiple teams have approached him offering a chance at redemption, but he’s apparently not in any rush to toe the rubber again.