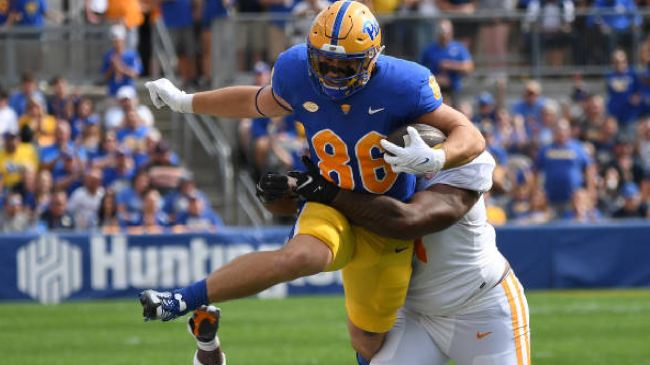 The early bye week seems to have done some good for the Pitt offense.

Pitt hasn’t been in action since their thrilling comeback win over West Virginia in Week 0 of the college football season, but they don’t seem to have missed a beat.

During that Week 0 matchup, Pitt’s offense took a little bit of time to get going against the Mountaineers’ defense, scoring just 10 points in the first half. The Panthers have had no such problem this week.

Pitt put points on the board on each of their first two drives to jump out to a 10-0 lead over the Volunteers.

Their 3rd drive would see Kedon Slovis throw an interception, but it didn’t take them long to bounce back.

On their next drive, Slovis found tight end Gavin Bartholomew wide open near the right sideline. After making the catch around the Tennessee 40, Bartholomew turned up field to make the most of the tons of space the Vols gave him.

Just after crossing the 30, he met his first obstacle on the play. A Tennessee defender tried to take on Bartholomew, but the tight end had different plans, leaping over the top of the defender and heading the rest of the way to the end zone untouched.

GAVIN BARTHOLOMEW WITH THE HURDLE AND HE TAKES IT 57 YARDS TO THE HOUSE pic.twitter.com/GD2JpiWlcR

The size of Bartholomew makes this play particularly impressive. The sophomore tight end is lined at 6’5″ and 255 pounds.

This long run was Bartholomew’s first touchdown of the season after being held to just 1 catch of 9 yards against West Virginia.

After putting together what will likely be the play of the weekend in Week 2, Bartholomew will likely be a player fans around the country have their eyes on the rest of the season.