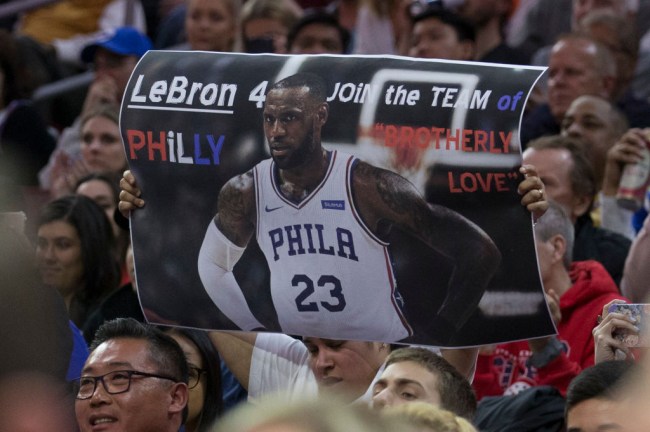 Now that the NBA offseason has officially begun, the battle to woo LeBron James away from Cleveland has officially kicked off. While teams are now allowed to approach the superstar, fans around the country kicked off the recruitment process long ago by resorting to a number of strategies in the hopes of landing The King.

You’d be hardpressed to find someone who wouldn’t want LeBron to join their team but I don’t think anyone is thirsty as 76ers fans who hope he’s the key to completing the process. This includes the people at the Pennslyvania-based Power Home Remodeling, which paid for three billboards on the highway leading to Cavalier’s arena during the regular season to try to get him to defect to Philadelphia (to their credit, LeBron called them “dope”).

However, it appears they’re not stopping there. Yesterday, three planes flew over Barclays Arena ahead of the NBA Draft towing banners to get LeBron’s attention (despite the fact that, as far as I know, he didn’t make the trek to Brooklyn).

There are three banners flying outside of the NBA Draft trying to convince LeBron to sign with the 76ers. pic.twitter.com/gLOupABlkQ

According to For The Win, the company explained the reasoning behind the stunt in a press release, saying:

“Our billboard concept had been copied in LA, in NYC and in Philly. We needed to do something new. The NBA Draft offered us the perfect opportunity to use our [creativity] in a new and exciting way — aerial billboards — bringing our message to new heights.”

I can’t wait to see what they do to try to get the Spurs to send Kawhi Leonard out east.