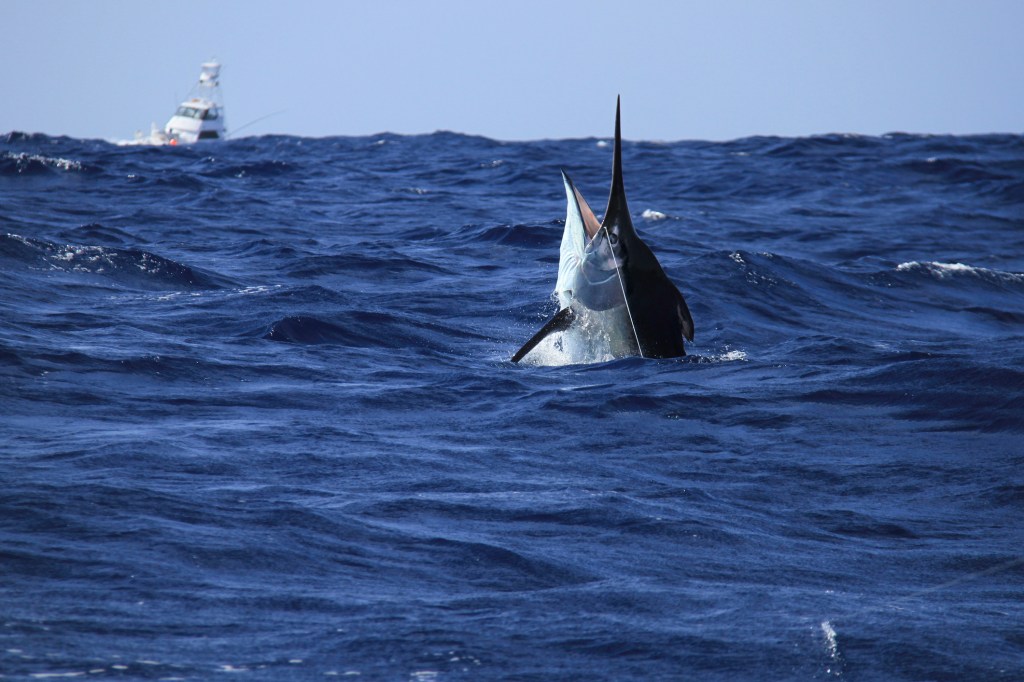 Catching a large Black Marlin is near the top of my bucket list along with a grander Bluefin Tuna and a Shortbill Spearfish in Hawaii. That last one’s mostly because of the rarity of the catch, they don’t get all that big compared to other billfish like Black Marlinfi.

The IGFA fishing world record for the largest Black Marlin ever caught was a 1,560-pound fish caught in Cabo Blanco, Peru in 1953. That fish measured 14-feet-6-inches long and an astounding 6-feet-9-inches in girth. This species can grow to ENORMOUS sizes as we see below.

Jarryd Craven was fishing out of the Tauranga Sport Fishing Club in New Zealand when he hooked the fish around 5pm. The fight lasted a grueling two hours and then he had to somehow get this monster fish into the boat and then back to the docks which took him until around midnight.

Once he got it to the scales, the Black Marlin weighed 957-pounds (434.5kg), which Tauranga Sport Fishing Club fishing record and the largest Black Marlin caught in that area in nearly 60 years. He shared his story of the catch with the New Zealand Herald:

Craven said he was trolling live baits east of Motiti Island with his father and partner on Sunday when they saw a large marlin “thrashing through the schools of fish” just before 5pm. Fishing with his Tiagra 130 big game reel rod and live kahawai bait, Craven threw a couple of lines in and hooked up to a black marlin.

“From there it was about two and a half hours before we landed it,” he said. “We had it on the leader four or five times but just couldn’t quite get it to the boat. “My partner Laura didn’t really know how to drive the boat so I was jumping up working the throttle while the old man was trying to work the leader. “We couldn’t get it on board the boat, which was a bit of a mission.” Another fisherman came around from Astrolabe Reef to help out, Craven said. “He actually stripped off and jumped in the water and swam through in the dark. We probably owe him a bottle of whisky or something,” Craven joked. (via NZ Herald)

He told the NZHerald that initially, they estimated the fish at 300 kilos (661 pounds) but that’s because they could only see half the fish. As the fish got closer and closer to coming into the boat he realized that he had a once-in-a-lifetime catch on his hands. Once back at the fishing club it took ’10 to 12 guys’ with ropes to get the fish off the boat and onto the scales.

This came just 10 kilos (22 pounds) short of the New Zealand fishing record for Black Marlin but it is a new club record and the largest Black Marlin caught in that area in nearly 60 years which is straight-up insane. THere’s been a bit of a worldwide drought over the past two years in proper ‘grander’ marlin, ones weighing over 1,000 pounds, and it’s not for lack of people out there fishing for them.

As for what became of the fish, the head will be mounted at the fishing club and the rest will be smoked and distributed with no portion going to waste. TO read more about this incredible fishing experience you can visit the article on the NZHerald by following that link!

Have you ever eaten marlin before? HIt me up in the comments section down below with your answer!