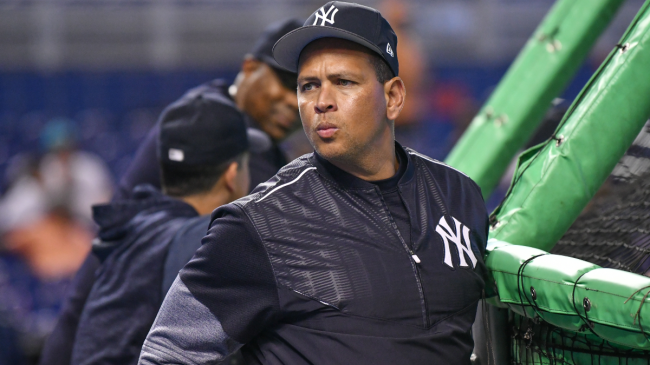 Alex Rodriguez is getting roasted Tuesday night for posting an odd self-tribute on social media. The post refers to A-Rod’s position atop the MLB’s career grand slams leaderboard.

On this day nine years ago, Rodriguez mashed his 24th home run while having ducks on the pond, passing New York Yankees legend Lou Gehrig. To commemorate his accolade, he posted a video of the homer on Twitter along with the following caption.

“9 years ago today, I passed the great Lou Gehrig to become the all-time MLB grand slam leader. I never thought I’d be mentioned in the same breath as the Iron Horse and to do it in the same uniform made it extra special.”

Of course, Alex Rodriguez is hated by many of baseball’s more traditional fans for his use of steroids. In 2014, he admitted to taking HGH while on the Yankees roster, prescribed by a fake doctor.

The comparison to one of the most revered players to ever don the pinstripes had many up in arms.

Lou Gehrig is one of the most respected and admired players in Major League Baseball history. The Iron Horse’s career spanned 17 seasons in the Bronx, and he played in 2,130 consecutive games between 1925 and 1939. He was a .340 hitter and just missed out on landing in the 500-home run club.

His career ended when he came down with an undiagnosed ailment we now know as ‘Lou Gehrig’s disease,’ or ALS. He then gave the most famous retirement speech in baseball history, saying “I consider myself the luckiest man on the face of the earth.”

Now, Rodriguez isn’t quite viewed in that same light. So, when A-Rod posted about passing Gehrig on the all-time grand slams list, many were quick to react.

On steroids though so there’s that.

The problem is that you were a cheater

Too bad he’s respected and you’re not.

These self tributes are weird man

Had to see that coming prior to posting. Safe to say, Rodriguez will never be revered in many baseball circles no matter his accomplishments on the field. That likely won’t stop him from posting these odd self-tributes online.