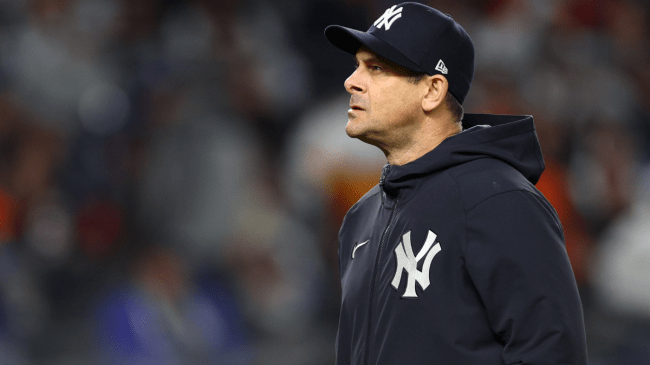 Aaron Boone has been on a warm seat in the Bronx for some time. Despite posting solid on-field results over his tenure, the lack of championship wins has many Yankees’ fans peeved.

Boone took over in New York in 2018 following a 12-year career in the majors. He’s put his name in Yankees lore as a player with his heroics in the 2003 ALCS. His walk-off home run against the hated Red Sox pushed the club to the World Series.

But he’s not won fans over in the time following his playing days. While the Yankees have won 90 or more games in each of his four full seasons as manager, they’ve yet to make an appearance in a World Series. Twice, they’ve been eliminated from the postseason by Boston. Most recently, they were swept by the Astros in the ALCS.

In that championship series loss, Boone attempted to motivate his team with a moment from baseball history. Unfortunately, it’s one that most New York fans would like to forget.

Aaron Boone showed clips of the Red Sox 3-0 comeback over the Yankees during the ALCS.

This year was supposed to be different.

New York jumped out to one of the most dominant starts in baseball history but crumbled down the stretch to lose the AL’s top seed. Slugger Aaron Judge set the franchise’s all-time single-season home run mark but went just 5-for-36 (.139) with 15 Ks in the playoffs.

The team found itself in an 0-3 deficit to the Astros in the ALCS, leading Boone to lean on history as motivation for his players. That history, though, is also the franchise’s darkest moment.

There has been only one team in MLB history to overcome a 0-3 series disadvantage. That was the Boston Red Sox in the 2004 ALCS. And who did they beat?

If you guessed the Yankees, you’d be correct.

The Red Sox would not only win the seven-game set, but they’d move on to win their first World Series championship in nearly a century. While one could understand the thought process of showing that a comeback is possible, using this particular moment was probably not the best decision.

It certainly didn’t sit well with fans in the Bronx.

Radio host Michael Kay absolutely went off on the Yankees manager and coaching staff in a segment this week.

“You are using the ‘04 Red Sox comeback as motivation? The darkest moment in Yankees history? How do you do that?

If George Steinbrenner was alive today, somebody would be fired to do something that. That’s tone deaf.” – Michael Kay pic.twitter.com/uXGT2IGhjt

“How in baseball god’s name can you be so tone-deaf as an organization to do that?”

Kay compared the situation to the Lincoln assassination, showing how deeply he and many others around New York feel about that colossal implosion. Players from the ’04 team were livid to hear that their embarrassment was being used as some sort of hope for current players.

As it turns out, the motivational tactic had no influence on the series’ outcome as the Bronx Bombers were swept in four games. The final loss came in an empty Yankee Stadium.

Boone continues to dig a deeper whole in New York. He’s not winning anyone over with this latest instance.