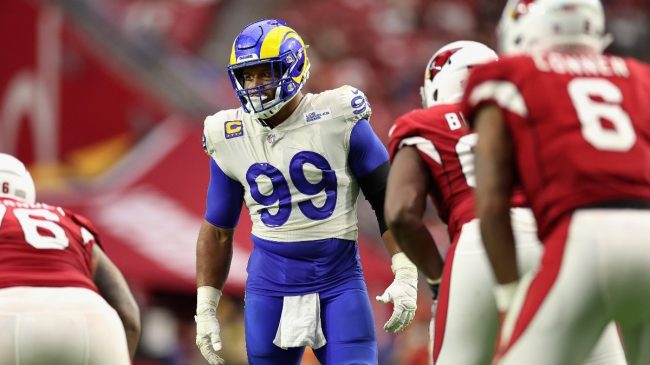 The Los Angels Rams were able to hold off the Arizona Cardinals on Sunday and achieve their second consecutive victory. As usual, Aaron Donald was a human wrecking ball in the trenches and recorded his 100th career sack. With that in mind, the superstar defensive tackle joins elite company in the NFL history books.

It wasn’t really a traditional sack, as Donald tripped up Kyler Murray in the backfield. Hey, whatever works, do it. Either way, the sack was the 10oth of Aaron Donald’s career, making him one of the best defensive tackles to ever play the game. Dov Kleiman shares a snippet of the sack, as the Rams’ superstar put the Cardinals in a tough third and long situation.

Aaron Donald with his 100 career sack.pic.twitter.com/GPYVopflAv

However, according to the Rams, Aaron Donald is the fastest defensive tackle in NFL history to reach 100 career sacks. Of course, sacks first began getting recorded in 1982, but still, Donald has been an absolute beast since joining Los Angeles in 2014.

.@AaronDonald97 is the fastest DT in NFL history to reach 100 career sacks. pic.twitter.com/JaJSHNuN0C

Randle has 137.5 sacks total, so Aaron Donald still has a ways to go to break that record. Regardless, the Rams are lucky to have Donald, as he’s been nothing but spectacular for this franchise.