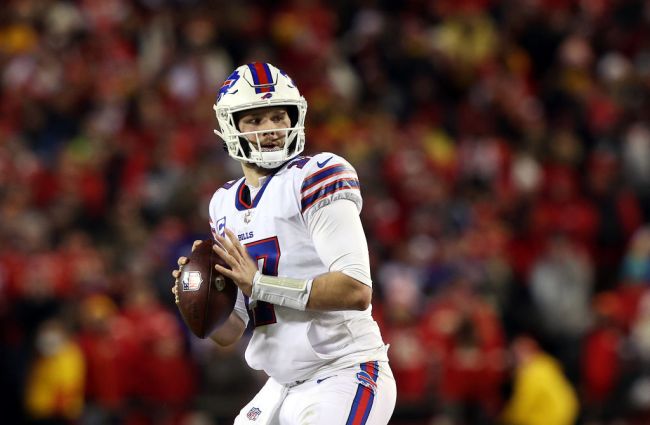 Throughout his NFL career, Aaron Donald hasn’t had much trouble bringing down any opponents. Over the first 8 years of his career, Donald has become one of the most dominant defensive players in the league, racking up 98 sacks and 441 tackles along the way.

However, he still sees one offensive player tat stands out as particularly difficult to take down. Today, he spoke with the Rams’ team website and compared Josh Allen to Ben Roethlisberger because of how difficult he is to tackle.

He’s a big guy. He’s a tough guy. He’s athletic. In my opinion, he’s like a futuristic Big Ben. A little bit more athletic, can move a little bit better. But he’s a guy that ain’t gonna go down easy so you got to come with your big boy pads when you get to wrap him up.

Allen and Roethlisberger are similarly built with both standing 6’5″ and Roethlisberger weighing in at 241 pounds while Allen weighs 237. Allen has been much more active in the Bills’ running game than Big Ben ever was with the Steelers, giving him many more opportunities to break tackles, but both have regularly displayed their ability to stay on their feet.

Allen has arguably been the most impressive part of the Bills’ running game over theist couple of seasons despite them spending 3rd round picks on both Zack Moss and Devin Singletary and his massive stature has helped with that.

Aaron Donald and Josh Allen are set to meet in Week 1 of the NFL season with the Rams hosting the Bills in the first game of the year as they begin defending their title as Super Bowl champions.

On September 8th football fans will get to see who prevails in the battle between one of the NFL’s best tacklers and one it’s hardest quarterbacks to tackle.