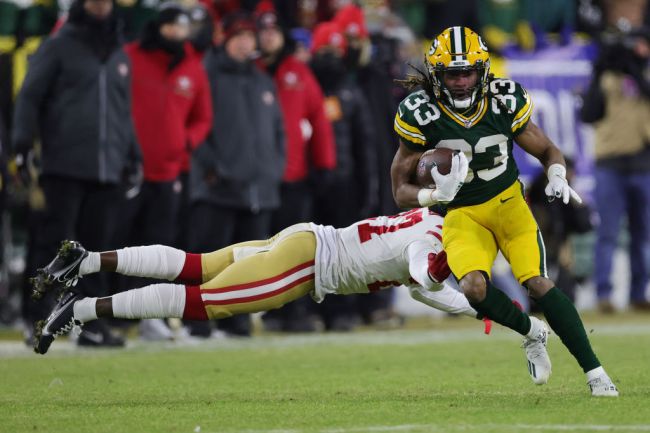 As the football world waits to learn what Aaron Rodgers’ future will hold, his Green Bay Packers teammates are also left waiting to find out if they’ll be playing with a new quarterback next season. Yesterday, their star running back, Aaron Jones, gave his thoughts on where Aaron Rodgers will spend the 2022 season.

He told the NFL Network that he believes Rodgers will return to the Packer this offseason.

“I’ve heard what everybody else has heard, what they’re reading. But I think he’ll be there, in my heart. Green Bay, I can’t imagine him anywhere else, that’s where he’s been his whole career. I just can’t picture him anywhere else. I think we had a lot of fun this year, I hope to have him back and I believe in my heart he’ll be back.”

Aaron Jones has definitely been having some fun with Aaron Rodgers as his quarterback for the entirety of his NFL career. During his 5 years in the league, Jones has racked up 4163 yards rushing and added 1448 yards through the air.

Having Rodgers has also given Jones a ton of scoring opportunities. He has scored at least 10 total touchdowns in each of the last 3 seasons and put up a staggering 19 in 2019. A continued partnership with Rodgers would definitely be in Jones’ best interest and he seems to believe that’s what we’ll be seeing next season.

That sentiment also aligns with what we’ve been hearing from the Packers lately. They’ve made it pretty clear that they want Rodgers back and the fact that Rodgers has already met with them to discuss the roster makes it seem like that’s his preferred outcome as well.

Maybe Jones will get a definitive answer on Rodgers some time soon.