All Rise: Aaron Judge Crushes 2 Bombs, Makes History By Hitting Most Home Runs By A Rookie Ever 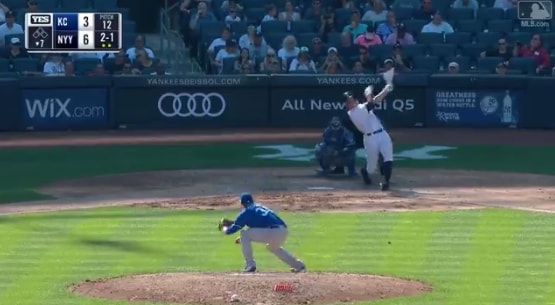 During an afternoon game at Yankee Stadium on Monday, Aaron judge crushed two home runs to give him the record for most home runs in a single season by a rookie. Judge came into the contest with 48 home runs, but stole the record when he slammed two home runs against the Kansas City Royals. Mark McGwire had held the HR title for rookies since 1987 when he blasted 49 home runs for the Oakland Athletics. In the third inning, Judge took Jakob Junis yard for his 49th dinger to tie McGwire.

.@TheJudge44 has chased down the record.

49 homers – for a ROOKIE. Incredible. pic.twitter.com/yqbGnnH1eK

Then Aaron was crowned the rookie home run king in the seventh when he took Trevor Cahill out of the park to notch his 50th tater.

Many have stepped to the plate. None have hit 50 homers as a rookie.

#AllRise for the only rookie to hit 50 homers – ever. https://t.co/i0edc452ci pic.twitter.com/cwJQEmAZb4

The momentous achievement was celebrated by the Yankees and MLB.

Time to edit the history books!#AllRise for Aaron Judge – the new record holder for most HR by a rookie! pic.twitter.com/KuE2otXn7B

That’s the most home runs EVER for a rookie. pic.twitter.com/DQhsmHHlyE

Judge has been anything but a rookie in his first year in the big leagues smashing 50 home runs while batting .281 with a .416 OBP and an extraordinary 1.026 OPS. The only hole in his game is his 202 strikeouts, but otherwise he is in contention for AL MVP with his mind-blowing stats. Judge currently has a WAR of 7.34, behind only fellow AL MVP frontrunner Jose Altuve, the second baseman for the Houston Astros who has an amazing 8.24 WAR. Judge leads the AL in home runs by a mile and is only trailing Giancarlo Stanton, who is the MLB leader with 57 bombs.