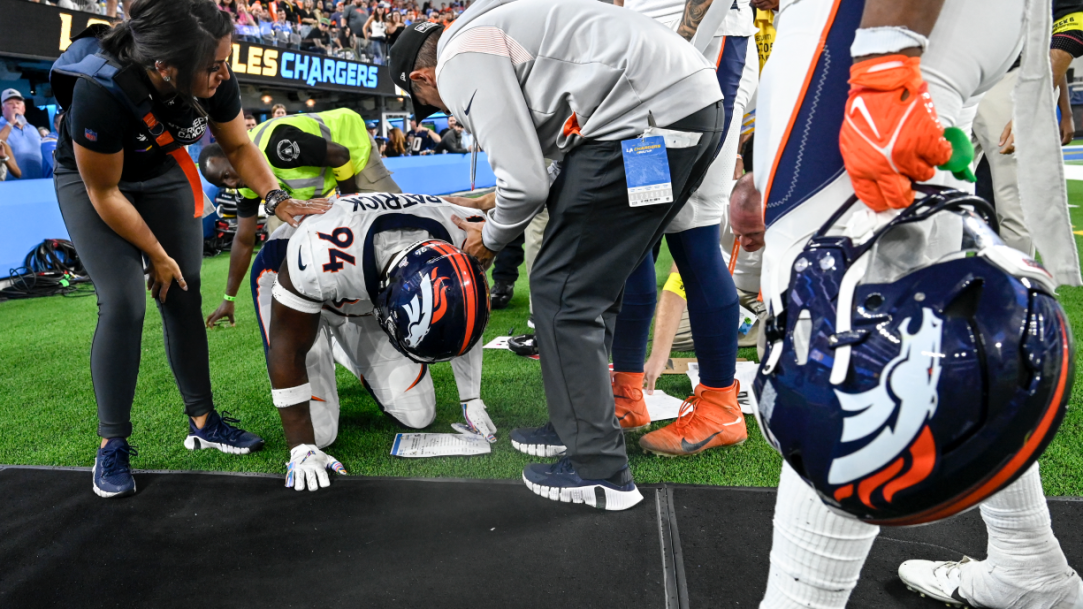 The Denver Broncos signed DE Aaron Patrick as an undrafted free agent out of Eastern Kentucky U. This marked Aaron Patrick’s second season in the NFL and he tallied 3 solo tackles in 5 games before tearing his ACL on October 17th in a game against the Los Angeles Chargers at SoFi Stadium.

Aaron Patrick has since been sidelined for the entire NFL season as he repairs and rehabilitates his ACL. And the Denver Broncos‘ DE is now reportedly suing the Los Angeles Chargers after tearing his ACL after he was forced to duck and miss a cameraman and tripped on mats and cords leading to the injury.

According to TMZ Sports, Aaron Patrick is alleging that SoFi Stadium, the newest and best stadium in the NFL, is to blame for his injury. But he’s not stopping with SoFi Stadium and the Los Angeles Chargers, he’s also directing blame on ESPN and the NFL according to the report:

“Patrick is heaping blame on not only the NFL and the Charges for it all, but also ESPN, the mat company and others — claiming they all could have done more to prevent the injury from happening.

Patrick claims all parties should have known the mats presented a dangerous hazard for players. He also says the NFL official shouldn’t have been standing where he was. Patrick is suing for unspecified damages, including lost bonuses and future earning potential.”

Is there precedent for something of this nature? There sure is… Reggie Bush was famously awarded $12.5 million by a jury in 2018 after slipping on a patch of concrete and tearing his meniscus in a game against the St. Louis Rams. After that award was handed down by the jury, Reggie Bush had this response:

“Player safety should be the foremost of importance to the NFL and its owners,. The NFL is a multi-billion-dollar sports enterprise and business, and it needs to do everything possible to protect its players from non-contact game injuries.

As for Patrick’s injuries, SoFi Stadium was built at a $5,000,000,000 expense; the stadium should have the state-of-the-art equipment to protect for player safety, and not use the type of $100 mats that you would expect to see in a restaurant kitchen.”

Aaron Patrick tore his ACL and is out for the year because of this injury. Completely understand where he's coming from https://t.co/xER2qyYpT0

Given that this is only Aaron Patrick’s second year in the league it could be quite hard to determine ‘loss of value’. He is currently under contract with the Denver Broncos this year and next. In 2023, Patrick set to earn a base salary of $940,000 (his 2022 salary was $598,889).

But these are the years when young NFL players prove their worth on the field and earn bigger contracts, something his lawyer will certainly highlight as this lawsuit progresses.