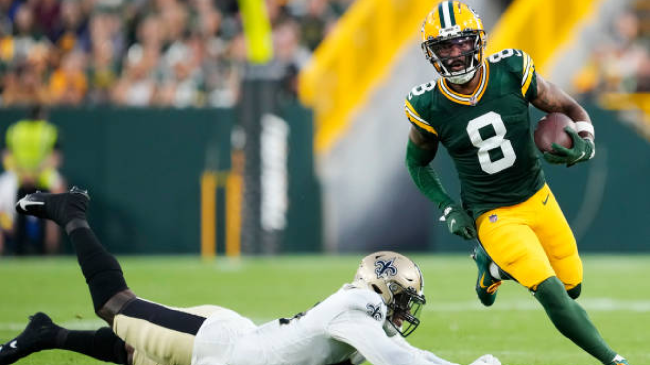 Throughout this offseason, football fans have wondered what the Green Bay Packers offense would look like now that Davante Adams is a member of the Las Vegas Raiders. Those fans got their answer this weekend.

The answer was not good.

In a game where the Packers offense only managed to put up 7 points, the wide receivers were a massive disappointment. All of the team’s receivers combined for just 120 yards, Christian Watson dropped a deep ball where he was wide open and likely would have easily scored, and the team’s leader in targets and receptions was a running back.

It’s clear the team’s receiver group needs some help. Today, Aaron Rodgers was asked about one player who could potentially improve the team’s receiving options, but it doesn’t appear that player is being considered for a bigger role.

The player Rodgers was asked about is Amari Rodgers, who the Packers drafted in the 3rd round last year. Unfortunately for both Aaron and Amari Rodgers, it doesn’t seem like Amari is going to be the answer to the Packers’ problems.

Aaron Rodgers on Amari Rodgers' fit in offense: "Yeah, he's returning for us now. That's all I got on it."

This is definitely not the answer Packers fans would have been hoping to hear as something needs to change quickly.

Luckily for the Packers, they get the Chicago Bears at Lambeau Field in Week 2, a situation that has tended to work out well for Aaron Rodgers throughout his career.

Maybe this week one of the team’s options at receiver will be able to step up and give Rodgers the trustworthy target he needs. For now, we just know it probable won’t be Amari Rodgers.