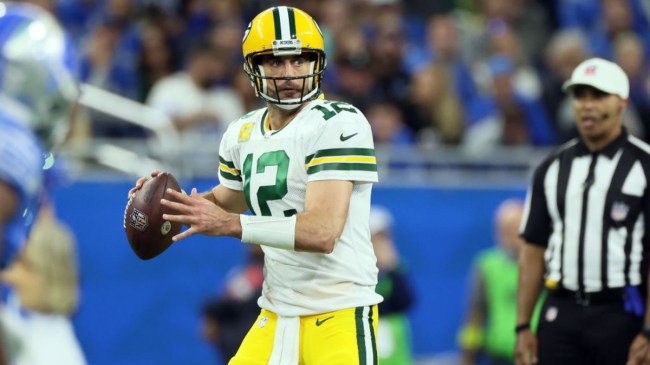 The Green Bay Packers are struggling. They have now lost 5 games in a row, including a loss to the Detroit Lions this past weekend, which was just the 2nd win of the year for the Lions. After that performance, they now find themselves with a 3-6 record and are looking like a Longshot to make the playoffs.

The most recent performance was particularly troubling as the Packers only scored 9 points against a Lions defense that had been repeatedly shredded throughout this season.

The team’s scoring troubles came in spite of the fact that they had little trouble moving the ball for large portions of the game, racking up over 400 yards and working their way into the red zone multiple times.

Today, he discussed his performance on “The Pat McAfee Show” and revealed that he really doesn’t care what you think about how he played on Sunday.

"Two of the interceptions weren't great throws.. I've thrown TD passes many times & I don't give a shit what any of these experts on TV have to say" ~@AaronRodgers12#PMSLive pic.twitter.com/RCaIXRbzMC

Rodgers might not care about what the rest of us think about his performance on Sunday, but that performance is definitely something he should be concerned about. Whether the Packers’ front office to blame for the team’s offensive struggles or not, Rodgers has not been able to make much of his current situation.

If that continues, it will be a long year for the Packers and it could become the last year for Rodgers with the Packers.