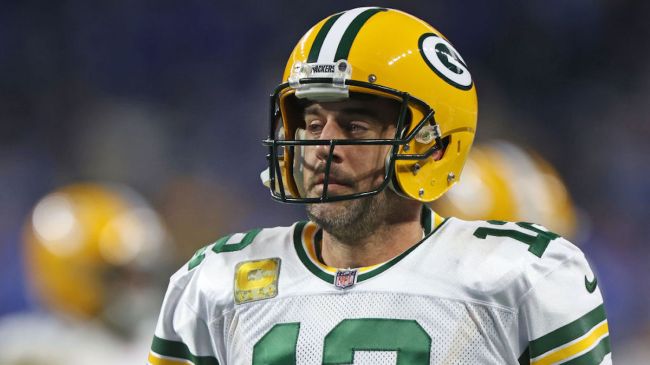 The Green Bay Packers lost to the Detroit Lions on Sunday — their fifth straight loss — and as a result, their record dropped to 3-6, putting them in a difficult position to make the playoffs.

The loss was also notable given how poorly two-time reigning MVP Aaron Rodgers played, as he completed 23 of 43 passes for one touchdown and three interceptions, which is the most he’s ever thrown in a single game.

Given how many people Rodgers has rubbed the wrong way in recent years, NFL fans were quick to hop on Twitter to dance on the 38-year-old’s grave as it appears the Packers will be missing the playoffs in what could be his final season both with the team and in the NFL.

Aaron Rodgers linsanity run is over

Aaron Rodgers has a career-high 3 INTS against the Lions…

I think Aaron Rodgers got vaccinated against being good at football anymore. https://t.co/a4YYMsgADa

Aaron Rodgers screaming at the bench about that red zone interception is like me screaming at my neighbor because I locked myself out of my car.

nobody:
aaron rodgers when he needs literally 3 yards: pic.twitter.com/gsj82jgj3F

Let's all come together and laugh at Aaron Rodgers againpic.twitter.com/cwkbnjfc9k

Aaron Rodgers: “Guys who are making too many mistakes shouldn’t be playing. Gotta start cutting some reps."

Aaron Rodgers at half pic.twitter.com/omasIxhog7

Speaking to reporters after the game, Rodgers said that he doesn’t regret returning to the Packers despite their recent struggles:

“I think that’s an exaggeration,” Rodgers said of whether or not he wished he retired instead.. “Frustration and miserability are two different emotions. When I decided to come back it was all-in, and I don’t make decisions in hindsight.”

So far this season, Rodgers has completed about 64% of his passes for 2,091 yards, 14 touchdowns, and seven interceptions. Rodgers and the Packers will look to right the ship next weekend when they host Dak Prescott and the Dallas Cowboys.