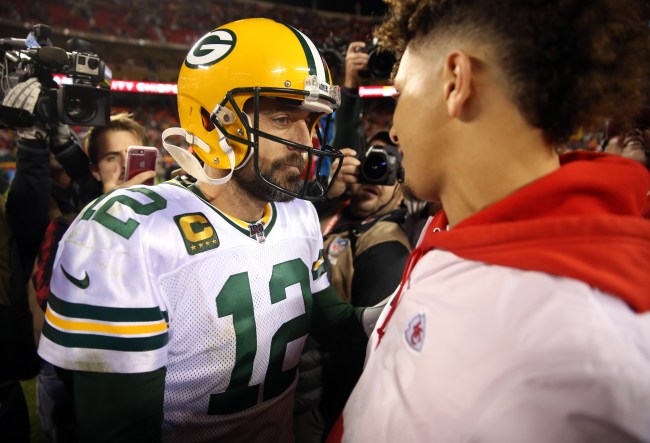 Aaron Rodgers isn’t scared of Patrick Mahomes if he ends up in Denver.

According to a report from ESPN’s Jeremy Fowler, Rodgers is “dug in” and the Denver Broncos are currently monitoring the situation because many people within the league believe the reigning NFL MVP wants to play somewhere in the west to be closer to his home in California.

ESPN’s Jeremy Fowler said on SportsCenter on Sunday that Rodgers is “dug in” on his trade request, and a move to Denver has become a source of intrigue:
“The Packers are still actively looking for solutions here; they’re trying to keep an open line of communication with Aaron Rodgers and his agent, Dave Dunn. So, no traction in the short term. But many people around the league believe Aaron Rodgers is indeed ‘dug in,’ and there’s a belief by some that he wants to be out West. Denver is a team that’s buzzing in league circles. I was told by a source that Denver is ‘monitoring’ that situation right now. But they’re also coming out of the draft days, and they’re in the team-building mode. They really like Drew Lock and Teddy Bridgewater, so they’re not committed or tied to anything. Talking to people around the league, they say about 60-40 they think that Rodgers is dealt.”

NFL.com’s Rich Eisen went on to add that he’s heard that Rodgers would like to the Broncos because he would love to compete in the same division as Mahomes.

"Is it personal or is it business? It's both."

News of @AaronRodgers12 unhappiness with the #Packers organization shook the #NFLDraft and @richeisen is hearing it's a number of things but can only see it playing out one way: pic.twitter.com/924qMAUU6Z

The NFL would probably love to have Rodgers and Mahomes in the same division because of the insane ratings it would bring.