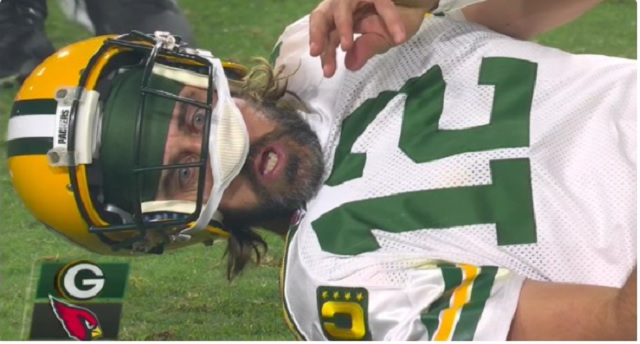 During the third quarter of the Packers-Cardinals game on Thursday night, Aaron Rodgers delivered a touchdown pass to Randal Cobb before getting absolutely crushed. While the pass itself was great, it was Rodgers’ face while laying on the ground that stole the show.

Rodgers’ helmet barely stayed on his head and his chin strap was all the way up covering his nose. He looked like he had just seen an actual ghost, and the photo became an instant meme.

After the game, Rodgers was asked if he had seen the picture that went mega-viral on Thursday night and he gave the perfect answer: the internet is undefeated.

Yes, Aaron Rodgers said he’s seen this picture. Asked him if he had any thoughts on it.

“The internet is undefeated,” he deadpanned. pic.twitter.com/76zqiT7IBo

While the hit Rodgers took likely has him feeling sore on Friday morning, Rodgers was able to get up and help lead the Packers to a big-time win over the Cardinals.

Rodgers finished the night going 22-for-37 through the air for 184 yards and two touchdowns in Green Bay’s 24-21 win on the road.