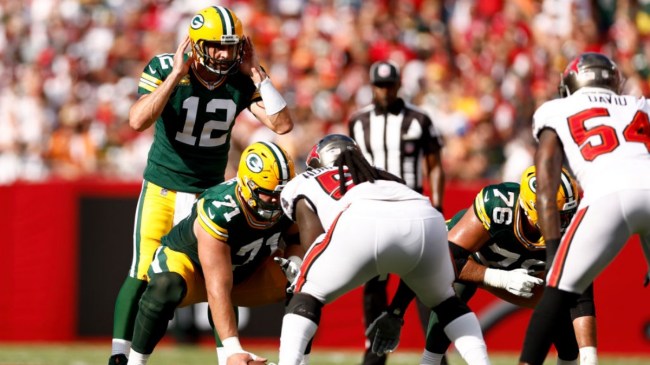 During his weekly appearances on the Pat McAfee Show, we’ve learned quite a bit of interesting information about Aaron Rodgers over the past couple of years. While he doesn’t have any mysterious toe injuries this season, that hasn’t made him any less entertaining of a guest.

Today, Rodgers provided fans with an interesting insight into his time in the NFL. According to Rodgers, he served as the offensive coordinator for the Green Bay Packers during a game in 2011.

That game might not be one that sounds particularly familiar to some football fans anymore, but it was a very important one for Matt Flynn. Flynn absolutely shredded the Detroit Lions in that game. Flynn threw for 480 yards and 6 touchdowns in a win over the Lions while Rodgers had the day off because the Packers already had the division and home-field advantage locked up.

That performance would lead the Seattle Seahawks to sign Matt Flynn to a 3-year, $19.5 million deal before they drafted Russell Wilson later in the same offseason. Wilson would win the starting job as a rookie, making Flynn an expensive backup.

Flynn responded to Rodgers’ story about acting’s offensive coordinator, saying had to audible out of most of Rodgers’ play calls.

Had to audible outta most of them

With Rodgers’ future seemingly regularly coming into question these days, he may have given us a hint at what’s next for him.