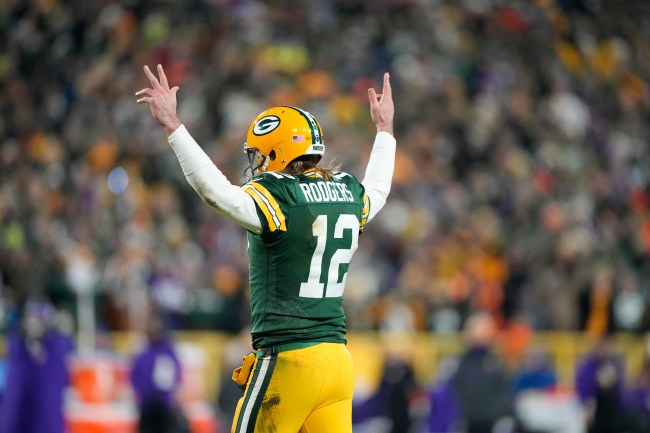 It wasn’t all that long ago that it seemed the relationship between Aaron Rodgers and the Green Bay Packers was broken beyond repair. He wasn’t happy with the way the team was run and appeared ready to retire rather than stay with the Packers.

His most recent quote should give Packers fans at least some hope that all of that has been put in the past. He had this to say on “The Adam Schein Podcast”.

“I decided when I came back that I was going to be all in with the team and all in to see things move forward to a better place. And that’s what the conversations were about, you know, during the offseason, was about being a part of those conversations that impact my ability to do my job. And I, you know, from one of the first days, Brian [Gutekunst] and I sat it down and got on the same page and it’s been a really nice Fall and Winter. I appreciate his approach, how it’s been, and it’s been very meaningful to me. So I’m thankful for that relationship, where it’s at at this point, and that’s made my life that much more enjoyable. So I gotta give Brian a lot of credit for meeting me in the middle.”

It sounds like Aaron Rodgers has been given the number 1 thing he wanted when he was threatening to retire. He wanted some say in personnel decisions. We got a glimpse of that when the Packers brought back Randall Cobb, but we haven’t seen much of a change since then.

If the Packers are now actively consulting Aaron Rodgers about personnel and he feels he’ll get some say in the team around him for next season, he could possibly stick around with the Green Bay Packers.

It also certainly doesn’t hurt that the Packers are currently the NFC’s top team and Rodgers is the favorite to win the MVP. Regardless of how things play out the rest of the year, Green Bay Packers fans have to be happy to hear these kinds of positive statements about Rodgers’ relationship with management.