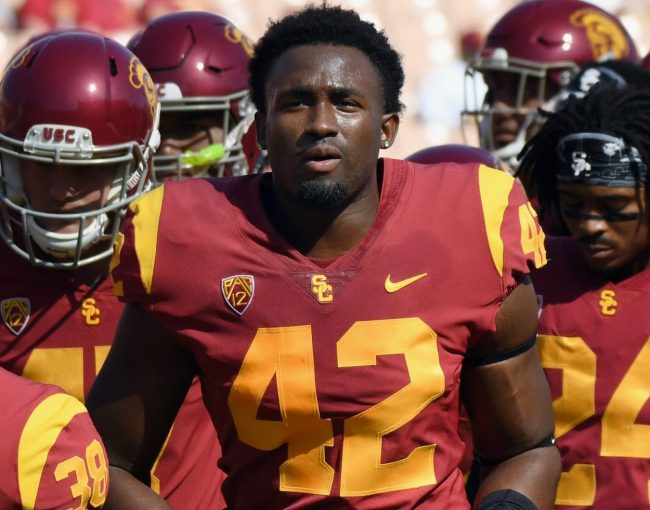 Former University of Southern California linebacker Abdul-Malik McClain made headlines when he transferred to Jackson State and join Deion Sanders. Now he is in the news for a very different reason.

McClain, 22, was arrested on Monday morning in Los Angeles. He allegedly orchestrated a fraudulent scheme to try and obtain “hundreds of thousands of dollars in COVID-related unemployment benefits.”

The former four-star recruit is facing 10 counts of mail fraud and two counts of aggravated identity theft. He was released on a $20,000 bond after pleading not guilty to the charges.

According to a release from the U.S. Department of Justice, he had a hand in a wild scheme. McClain allegedly helped to organize at least three dozen fraudulent applications during the summer of 2020.

The applications were seeking at least $903,688 in Pandemic Unemployment Assistance benefits and led the California Employment Development Department to pay out at least $227,736. The DOJ states that McClain “organized and assisted a group of other football players” in the scheme.

McClain and his fellow participants filed false claims for unemployment benefits. Those claims included false information about their prior work history, pandemic-related job loss and efforts to seek employment in California.

Ultimately, many of their claims were successful.

As a result, they obtained debit cards from Bank of America. Those cards were loaded with large sums of money in unemployment money.

After receiving the cards, according to the report, the players then used them for cash withdrawals. Meanwhile, McClain “sought and obtained a cut for helping others.”

McClain’s brother, Munir, also previously played at USC. He was suspended by the Trojans in October of 2020 due to his connection to the alleged scheme, according to the Los Angeles Times.

Munir admitted that he applied for financial relief. However, he thought that he qualified because the pandemic slowed his avenue to make money as a sneaker reseller.

The indictment does not specify a school, but refers to a “University 1” that is cooperating in the investigation. The McClain brothers were both enrolled at USC during the time that the U.S. Attorney’s Office alleges that the scheme took place.

The timeline falls somewhere from July 2020 to at least September of that year. You can read the full release HERE.