Adrian Peterson Already Bitching About His Role In New Orleans: ‘I Didn’t Sign Up For Nine Snaps’ 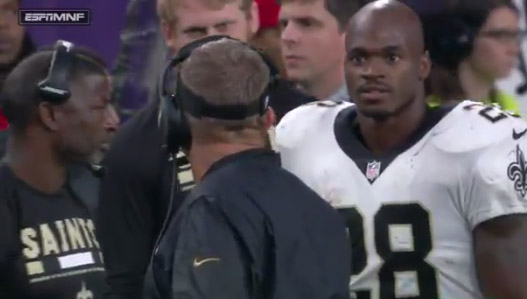 Back when I heard that Adrian Peterson had signed a contract with the New Orleans Saints I thought, “That’s an odd team for him to join.” They already have 27-year-old Mark Ingram who just rushed 1,043 yards on 5.1 yards per carry. How much playing time does Peterson think he’s going to get down there? Then the Saints went and drafted Alvin Kamara only adding to my confusion.

It seemed to me that somewhere like Baltimore, Denver, Washington, the Giants or even Green Bay would have been better fits as they all had needs at the running back position. But AP chose New Orleans and here’s a shocker: after just one game he’s already complaining about how the Saints are using him.

As many of you saw on Monday night, Peterson appeared to be yelling at head coach Sean Payton about something after playing only five snaps in the first half and giving his new coach the kind of death stare that would Michael Phelps proud.

According to Payton and Peterson after the game, everything was fine, reported the Times-Picayune.

“There’s no conflict,” Peterson said. “Let’s not try to spin it like it is. There’s no conflict. I got a lot of respect for coach Payton and his offense. He’s a great mind. We’re going to learn from this (game).”

“We weren’t in any heated exchange,” he said. “I’d tell you if we were in a heated exchange, so why don’t you ask him? I think he was into it; we were all into it. There was none that I can recall, and I’m being honest.”

Hmmm… okay, then why did Peterson then proceed to say this to USA Today on Thursday?

“I didn’t sign up for nine snaps, though,” Peterson told reporters Thursday. “But unfortunately that’s the way the game played out. In my mind, personally, I knew it was gonna take some adjusting. You know, me and Mark (Ingram) played in the last preseason game, and AK (rookie running back Alvin Kamara) didn’t even play that game. So with all three of us being out there, I knew it would take a game or so to kind of get adjusted.”

Peterson had six carries for 18 yards in game number one and based on how Sean Payton loves to use a committee of running backs and the fact that Drew Brees throws the ball more than just about any other quarterback in the league (Peterson is not a great receiver) he better start getting used to stat lines like that.