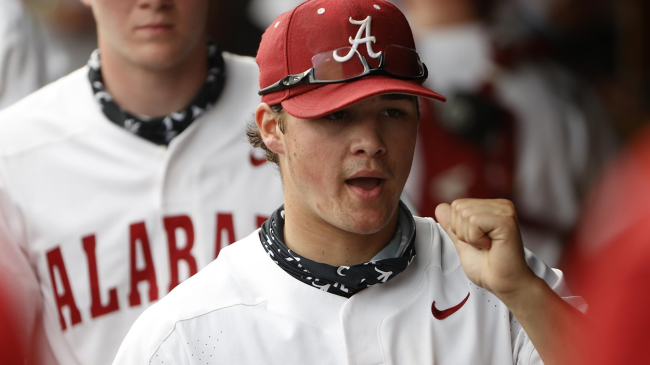 As is tradition, the SEC Baseball Tournament is dealing with inclement weather. The first game of the day saw a nearly four-hour rain delay as thunderstorms rolled through the Hoover/Birmingham, Alabama area on Tuesday morning.

During the delay, Crimson Tide backup catcher Will Portera won over the hearts of new fans all across the country.

Portera, a redshirt freshman from Memphis, was the No. 8-ranked shortstop in his recruiting class out of high school. Although he didn’t find an immediate opportunity to be in the lineup full-time during his first two years at Alabama, he has played all over the field at multiple different positions in 2022.

Most frequently, the 5-foot-10, 185-pound utilityman found a home behind the dish and has served as the backup backstop throughout the season. As a result, Portera spends much of his time out in the outfields working with his pitching staff in the bullpen.

On Tuesday, he had a different set of pitchers to catch— a line of children.

The SEC tournament brings out families from all across the southeast and with schools mostly out for the summer, a lot of young kids come with them. As they aspire to one day play in the tournament themselves, they look up to the players on the field. In some ways, they’re celebrities, in others, they’re idols.

That’s why Portera’s actions on Tuesday were so cool. As the game paused for weather, he crouched down in left field and played catch with a lengthy line of kids.

Stuff you like to see. @AlabamaBSB backup catcher #31 Will Portera has a line going with young fans at the Hoover Met allowing them to pitch to him during the rain delay. Its 5-1 with Alabama holding the lead over @BaseballUGA through the delay. pic.twitter.com/Jx98XbVRUl

kids in left field are lining up to play catch with will portera pic.twitter.com/Z7UesyEuIT

#Alabama catcher Will Portera is currently warming up the kids in left field during the rain delay: pic.twitter.com/eXl68GXVC2

Things you simply love to see. Shoutout to Portera.