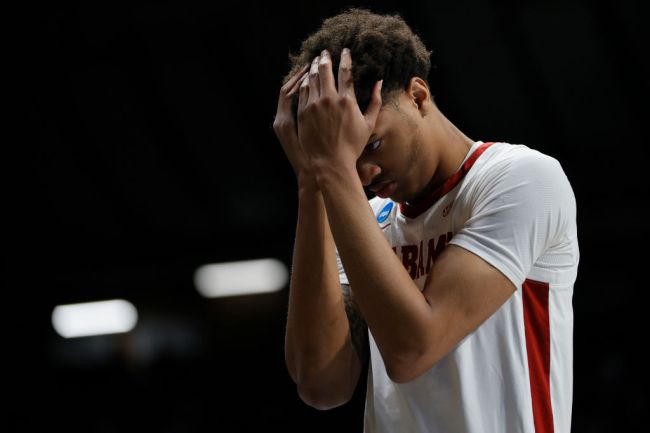 Make your free throws, kids. Alabama’s Elite Eight dreams fell short on Sunday with a 10-point loss to UCLA, but it didn’t have to be that way. The Tide fell behind by 11 at halftime and the momentum was in favor of the Pac-12 underdogs until an 11-0 run out of the locker room made it a brand new ballgame with 15:13 left to play. Their ability to get hot and knock down buckets at the right time is the M.O. for Nate Oats’ group and it led them to both the SEC regular season and tournament titles. However, that was not enough against the Bruins.

As the back-and-forth battle continued down the stretch, there was a common theme that led to the ultimate demise of the 2-seed from Tuscaloosa— free throws. Both teams went to the charity stripe 25 times. UCLA hit 80 percent of its attempts, while Alabama made only 44 percent. By that math, the Tide left 14 points on the board, which would have won them the game. In addition, while there is never one single moment to blame for a loss, three free throws standout in particular.

Alabama almost lost because a 73% free throw shooter missed 3 of 4 shots down the stretch, but they're going to OT because a 27% 3-point shooter swished a 30-footer with the clock expiring

Herb Jones stepped up to the line with the game tied at 61. He made one of two shots. The Bruins then made a go-ahead layup with 14 seconds remaining and took a 63-62 lead. They proceeded to foul Jones and sent him back to the line with a chance to tie the game or take the lead. The SEC’s Player of the Year missed both shots.

Alabama was forced to foul, and UCLA made both free throws to go ahead by three with four seconds. Cue Jon Rothstein:

The Bruins were unable to foul and Alex Reese hit the shot of the year to send it to overtime. Onions!

🚨😱 FROM THE PARKING LOT! 😱🚨 pic.twitter.com/TuW9rf6uJM

Unfortunately, Reese’s heroics will soon be forgotten, as his team went ice cold in overtime. On the other side, UCLA made 11-of-12 free throws to close it out in the extra period and advance to the Elite Eight for the first time since 2008. After a tame, pretty boring slate through the first six games of the Sweet 16, Sunday night’s battle between two very different style programs provided a thriller through 40 minutes and made Bill Walton very happy.

It also provided a reminder that has been said before and will be said again… MAKE YOUR FREE THROWS, KIDS!!!!!!