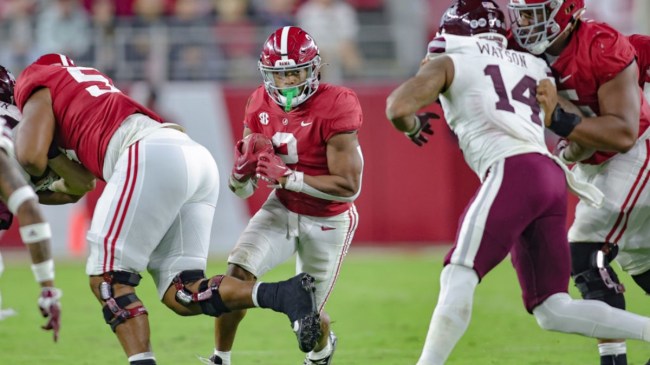 This season has not gone according to the usual script for Alabama’s football program. Most years, fans tend to spend the month of November debating whether Alabama will win the SEC title game and which of the 4 spots in the College Football Playoff they’ll end up claiming.

This season, their dream may have already been dashed before we reach the midway point of November.

Alabama entered this weekend needing some help to even have a chance to make it to the SEC title game.

They trailed LSU by a game after losing to the Tigers in Baton Rouge last week. That meant that LSU would need to lose each of their last 2 SEC gams for Alabama to be able to win the SEC West.

LSU dashed those hopes before Alabama even took the field today, beating Arkansas 13-10 and making sure Alabama will miss the title game for the first time since 2019.

Alabama has been eliminated from SEC Championship contention.

Now LSU just needs to hold off Ole Miss, who is currently playing against Alabama. Both teams have only 1 SEC loss, but Ole Miss’ loss came against LSU.

Despite the fact that oddsmakers somehow had Alabama with the 6th best odds to win the College Football Playoff this season, the win by LSU should just about eliminate the Crimson Tide from that as well.

The Playoff committee has never let a team in with 2 losses before and now Bama won’t have an SEC title to strengthen their case for a berth.

Now all Alabama can do is help LSU out as a win from the Tide would officially put the Tigers in the SEC Championship game. At least they can still get themselves into a New Year’s 6 bowl if they win out.