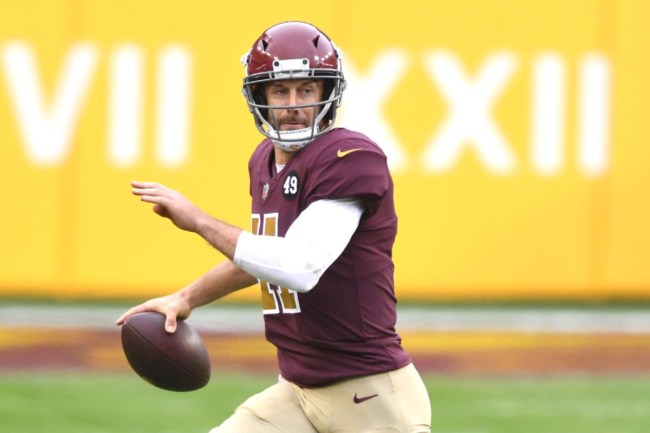 Having played two seasons in Washington, Alex Smith knows what it’s like playing for the team in the nation’s capital. Given his past experiences in Washington, Smith has offered up some advice for the franchise’s new QB, Carson Wentz.

Smith was a guest on ‘The Rich Eisen Show’ on Thursday morning and Eisen asked him what words of advice he would have for Wentz. Instead of going with generic player speak, Smith got very honest about the situation.

“I think you gotta try to eliminate the noise there. There’s a lot of noise,” Smith told Eisen.

“There’s a lot of distractions in that entire organization, everything surrounding it. Obviously deservedly, it’s been flawed the last 20 years. There’s a lot of stuff going on there, it makes it kind of different to focus on the football.”

“There’s a lot of distractions in that entire organization.”

Asked Alex Smith what his advice for new #Commanders QB @cj_wentz would be — and he revealed how off-field issues crept into his game day focus in Washington.

Smith certainly isn’t lying when he says “there’s a lot of noise” within the Washington organization.

Team owner Dan Snyder has been in the middle of multiple investigations over the years, some still ongoing, which is almost certainly what Smith is referring to. Then, of course, you have the fact that the team played last season without a name. That’s not a distraction really, but certainly something different.

NFL fans had interesting reactions to Smith being so honest with his advice for Wentz:

Sounds like a out for Wentz if he doesn’t do well. https://t.co/goMDk0NDG1

Alex Smith isn't wrong about his statements concerning the #WashingtonCommanders. However, he chose to sign on with the team in spite of its struggles. Smith was also seen fraternizing with team owner Dan Snyder. Alex became part of the dysfunction in Washington. #TakeCommand https://t.co/9pnGh0bHwx

The amount of people hurt over Alex Smith telling the truth is alarming https://t.co/rKzcwTCi1o

This is annoying because I really liked Alex, but he was such a hindrance here with what happened, the team stuck with him, PAID HIM, and he did not need distractions to not play well when he literally had one leg, yet he now constantly talks shit like a spiteful little kid https://t.co/27WYUi0yD0

Not sure why Washington fans are surprised or upset by this. This is our harsh reality. Doesn’t mean they (Ron and company) are not changing or trying to change things. It takes more than a couple years to undo 20+ years of dysfunction. This shouldn’t be a surprise. https://t.co/loXK0p14IB