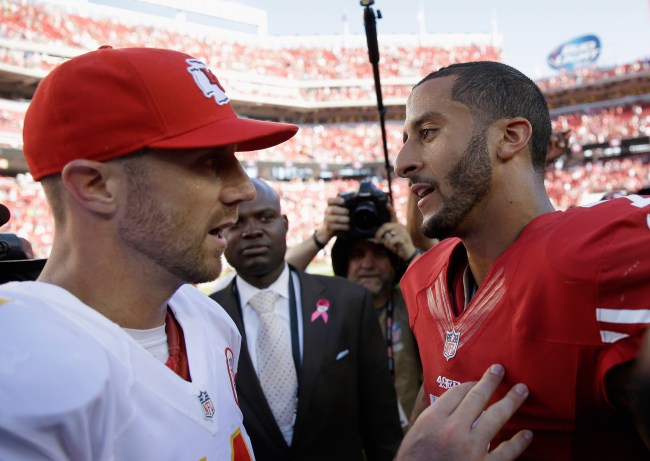 Washington Redskins quarterback Alex Smith, who is still recovering from a horrendous leg injury he suffered in 2018, is coming to the defense of former teammate Colin Kaepernick.

While on “The Dan Le Batard Show with Stugotz” on ESPN Radio on Friday, Smith discussed his time with Colin Kaepernick in San Francisco and finds it absurd that Kaep isn’t in the league.

“It was hard to kind of see that trajectory because he was playing so good, and doing things nobody had done,” Smith said on ESPN Radio. “I think he still holds the single-game rushing record for a quarterback. It was crazy.

“So with that said, it was so absurd — I think equally — that it was only a few years later when you’re like, ‘This guy doesn’t have a job.’ That was hard to imagine. It still is, a guy with his ability and his trajectory that all of a sudden wasn’t playing.”

Smith, who lost his job to Kaepernick in San Francisco, was impressed with his former teammate the two years they played together.

“Kap was a great teammate, obviously,”. “I was with him his first two years, the first year as the backup and sitting and watching, and then halfway through the season he next year when he took over and rolled.

“The run he had and the ability was crazy, it’s crazy good. Certainly if you’re a guy with that kind of running ability and also be able to throw the football and making plays really in his first chunk of playing time, I mean the trajectory he was on was absurd.”

Kaepernick has not played in the NFL since 2016, after he caused a firestorm for protesting racial injustice by kneeling during the national anthem on the sidelines of NFL games.

It is kind of wild that Alex Smith is still in the league while Kaepernick has to lobby for workouts.