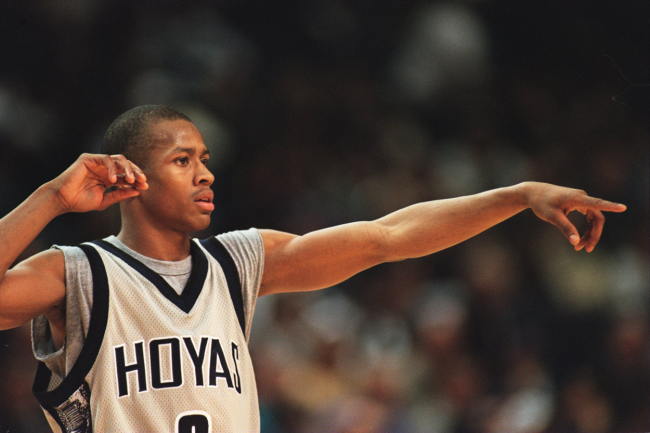 While the vast majority of people would know Allen Iverson for 11-time NBA All-Star career, he was also a ridiculous athlete on the gridiron. In fact, he was very close to playing both sports in college.

Iverson made an appearance on The Dan Patrick Show on Thursday morning and shared that he was down to two potential colleges that would have allowed him to be a dual-sport athlete. But the 17-year-old’s legal troubles kept him from pursuing that dream.

While at Bethel High School in Hampton, Virginia, Iverson not only propelled himself to become the top high school basketball recruit in the country. He was also, arguably, the best high school football player in the nation.

At the very least, he was the most athletic.

Iverson played safety, cornerback, wide receiver and even earned the starting quarterback role after a year in the program. He could literally do it all.

There are very few people — ever — with Iverson’s athleticism.

Allen Iverson was really dribbling a football like it’s nothing.

This is just silly. 🔥 pic.twitter.com/Wowkyr18Q0

And Iverson’s arm was up there with some of the strongest in the NFL.

Because of his innate talent, Iverson led his high school to state championships in football and basketball less than three months apart. It also led him to be recruited as the dual-sport athlete he wanted to be.

However, Iverson encountered some well-documented, fascinating legal issues and had many of his scholarship offers revoked.

In his first game after being released from prison, Iverson went off.

Ultimately, Iverson ended up at Georgetown and the rest is history.

He was the first overall NBA Draft pick and became a Hall of Famer. If he had not run into trouble in high school, he told The Dan Patrick Show that he was considering playing both sports for the Fighting Irish and Terrapins.

Allen Iverson told us that when he got in trouble in high school, all his football/basketball scholarship offers went away.
If not for that, Iverson said he was strongly considering going to Notre Dame or Maryland to play both sports.

He also said that he wanted to play football at Georgetown, but his head coach said no. In turn, we are only left to our imagination of “what if?”