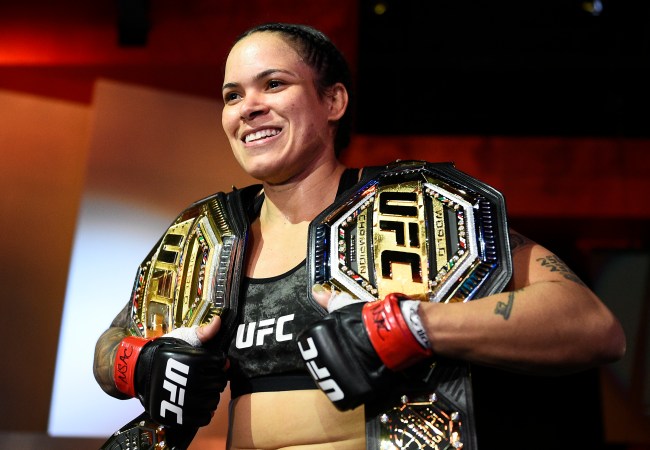 Amanda Nunes puts her Bantamweight title on the line for the first time in 2 years at UFC 269 on Saturday. Based on her interview with TMZ Sports last night, it seems like she has a pretty clear picture of how the fight will play out.

Nunes will be taking on Julianna Pena, the Ultimate Fighter season 18 women’s bantamweight division winner. Pena is the #3 ranked fighter in the division and has worked her way into this fight with a 6-2 UFC record. Still, she thinks she is being overlooked by UFC fans and Amanda Nunes.

However, Nunes assured TMZ Sports that’s certainly not the case.

“[Julianna] is delusional, but it doesn’t mean I’m not taking her seriously. I do. I trained very hard and very smart, I’m very sharp for her. A lot of things she says are not true, she’s being delusional.”

Not only does Nunes assert that she is focused on this fight, but she also seems certain that she’s going to finish Pena on Saturday night.

“Honestly I don’t see this fight going to the judges at all. Honestly. I’m very sharp. I know she’s gonna make a lot of mistakes like she always does.”

Oddsmakers would appear to agree with her assessment as Draftkings currently lists her at -350 to finish this fight.

If Nunes gets the win as she’s expected too, it would be her 6th consecutive defense of the Women’s Bantamweight title belt. That would put her just one more defense away from tying Ronda Rousey for the most all time.

If Nunes gets the win in the UFC 269 co-main event, it’s going to make life very difficult for the UFC’s matchmakers as she’ll have just about cleared out the 135 pound division.