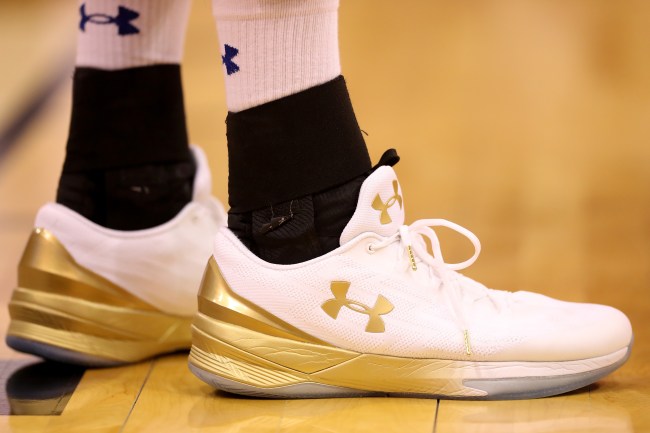 SALT LAKE CITY, UT - MARCH 16: A detail view of the Under Armour shoes worn by Mike Daum #24 of the South Dakota State Jackrabbits in the second half against the Gonzaga Bulldogs during the first round of the 2017 NCAA Men's Basketball Tournament at Vivint Smart Home Arena on March 16, 2017 in Salt Lake City, Utah. (Photo by Christian Petersen/Getty Images)

WSJ: Just 7 Ways to Publicly Invest in Sports, JWS: Not the Case

The WSJ published a recent story asserting there are few ways to directly invest in sports, a notion we dispute. The article deemed just 7 publicly traded equities to be sports-related and based their conclusion, that fans are better off watching and playing sports than investing in them, on the performance of 2 exchange traded funds; one of which (FANZ) has beat the S&P since its July ’17 inception, which would seem to counter to their argument. The article cites Matt Hougan, the CEO of Inside ETFs, and his belief that most of the economic value within sports (ownership and player contracts) “comes in private transactions”, to support the author’s thesis; but fails to pay consideration to the revenue streams that support those contracts (and generate ownership profits). It’s worth noting that JohnWallStreet follows over 100 sports-related equities.

Twitch (AMZN) and the Overwatch League (OWL) have agreed upon a 2-year media rights deal worth at least $90 million dollars (the biggest deal in esports history); enabling the live-streaming video platform to broadcast all league matches, starting with the first match of the inaugural season tonight at 7p EST. Twitch will be the exclusive worldwide (minus China) digital provider of the league, broadcasting all regular-season, playoff and championship matches in 3 different languages (English, Chinese, French). To drive viewership and engagement, the league and its broadcast partner will introduce a program that rewards the league’s biggest fans and give them a chance to root on their favorite gamers/teams with OWL “cheermotes”.

Howie Long-Short: ATVI shares are up 480% (from $11.52 in ‘13) over the last 5 years (to $66.19 at Tuesday’s close), while most reporting a Q3 record $1.9 billion for revenue generated (+17% YOY) and raising full-year revenue guidance from $6.4 billion to $6.68 billion ($2.08/share), in early November. CEO Robert Kotick has tried to temper expectations for the Overwatch League saying, “the first season is really about building a solid foundation”; but news that the company has recently launched a consumer products division (which will sell OWL skins) combined with the newly signed broadcast deal, would seem to raise the bar.

Analyst Predicts 30% Decline for Under Armour, “No Fundamental Recovery in Sight”

Susquehanna Financial Group Analyst Sam Poser has urged investors to sell Under Armour (UAA), predicting the share price will drop 30% in 2018; gains the company realized over the last 2 months. Poser believes the company’s decision to advertise with low-end retailers (i.e. KSS, DSW) is having an adverse effect on its efforts to sell product to “better retailers” (i.e. DKS, HIBB); insisting “there is no fundamental recovery in sight.” Stifel Analyst Jim Duffy has a contrary opinion, he’s pleased with the company’s recent cost savings initiatives and improved performance and foresees growth opportunities both internationally and within their footwear division.

Howie Long-Short: Following release of Poser’s note on Monday morning, shares declined 5.5%; closing at $15.11, the lowest the stock has been priced at since Summer ’13. Need a reason to believe UAA can turn it around? In June ’17, the company hired Patrik Frisk (former ALDO Group CEO) as President and COO. The 30-year industry veteran is considered an expert in preparing companies for a sale.

Fan Marino: Sloane Stephens, Under Armour’s long-time top female tennis endorser, has parted ways with the company and signed with Nike (NKE). Stephens, who signed with the brand as a teenager in 2010, won the 2017 U.S. Open wearing UAA tennis apparel. Financial terms of the deal were not disclosed.