Andre Muniz Scores Another Armbar Against Eryk Anders At UFC 269 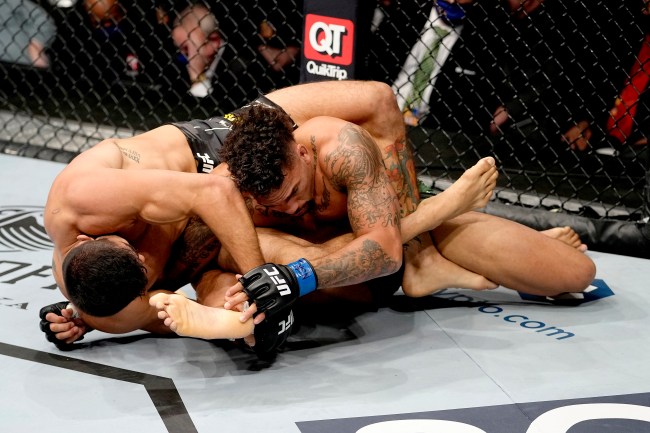 I think we’re starting to see a trend develop in Andre Muniz’s career. If he gets the fight to the ground, you are absolutely in trouble. That was the case again tonight.

Andre Muniz came into UFC 269 having scored consecutive armbars in his last two fights. The second of those was particularly impressive. He took on renowned jiu-jitsu practitioner and long-time UFC vet Jacare Souza. It took him less than a round to lock up an armbar and break Jacare’s arm.

Tonight, he took on Eryk Anders, who isn’t the same level of grappler as Souza, but has shown solid takedown defense in his UFC career and had the striking advantage in this fight. That advantage didn’t matter long.

Muniz quickly went to work going for takedowns and was able to land 2 of his first 5. He spent most of the 3+ minutes of this fight in top control before a slick move finished the fight off.

Muniz was on Anders’ back when Anders tried to stand up and shake him off. Instead, Muniz adjusted, grabbed a hold of Anders’ arm and got the tap. It was nearly identical to the ending of Muniz’s win over Jacare.

The loss drops Anders to 14-6 with 1 no contest. It also puts a stop to the momentum he had gained in his two fights against Darren Stewart.

Muniz’s win brings him to 21-4 overall and 4-0 in the UFC. Muniz made it clear once again tonight that this guy has plenty of promise for the future.

He’ll certainly be back in the top 15 after this win and we’ll see him taking on some high-level competition his next time out.