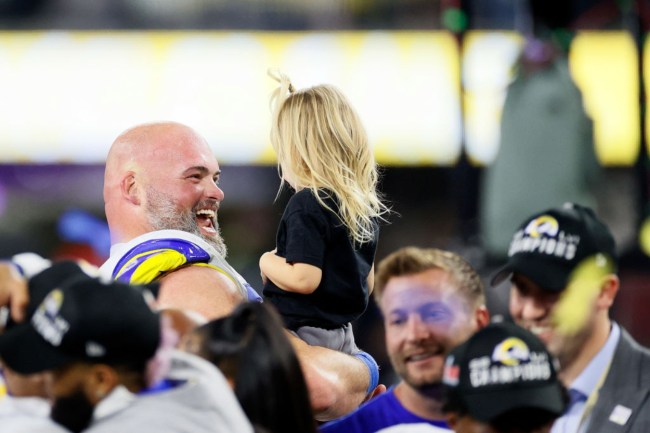 Andrew Whitworth’s kids were the first to know that he was retiring from the NFL following the Rams’ Super Bowl win over the Bengals.

While the NFL world knew that retirement was on the table for the 40-year-old, he made it official on Tuesday afternoon. It turns out that he made up his mind about retirement long before the team officially announced the news.

The NFL shared a video after the news became official showing Whitworth sitting with his kids and telling him the news while sitting on the field just moments after winning the Super Bowl.

You may get teary-eyed watching the video, just a heads up.

"That was daddy's last football game."

Whitworth let his kids in on a little secret after #SBLVI ❤️ (via @nflfilms) pic.twitter.com/4JHQWEndDO

Whitworth was drafted 55th overall by the Bengals back in 2006 after spending his college days at LSU.

The 16-year vet not only goes out on top with a Super Bowl ring, he was also named the 2021 Walter Payton Man of the Year.

It was a great season for Whitworth, to say the least, and now he’ll ride off into the sunset with his family and enjoy that next chapter of his life.