Angel Hernandez Is Already Getting Roasted During 2022 After Weird Dance, Bad Strike Zone 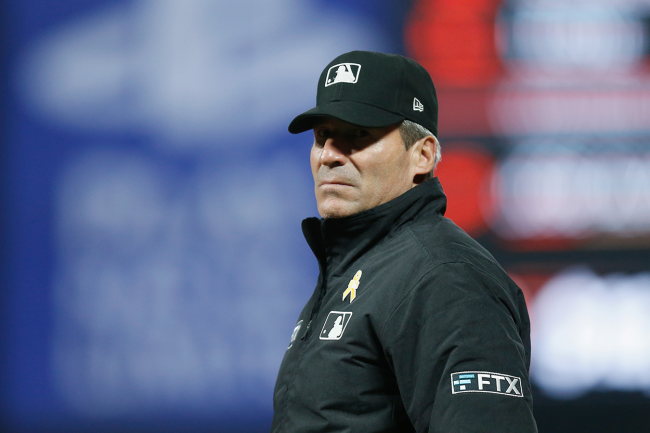 In most instances, it is better that the fans at home don’t consider an umpire a household name. There are very few umpires who are known by serious, casual and non-baseball fans alike.

That list is highlighted by Hernandez for all of the wrong reasons. He is notorious for being one of the worst umpires in the sport. Here are just a few examples why:

At 60 years of age, the veteran umpire began his 31st season in the MLB last week. Now, in just week two, he is already up to his old tricks.

Hernandez was behind the plate for last night’s game between Atlanta and Washington. He was off the mark early and often.

angel hernandez is actually blind. there is absolutely no other explanation. pic.twitter.com/KM5mm5SXIf

Angel Hernandez says this was a ball. pic.twitter.com/zqtUKscusy

how is Angel Hernandez still in the league pic.twitter.com/Etevpb3FWY

His strike zone was all over the place and inconsistent.

And then, during the eighth inning, he bizarrely got jiggy with it. As a reminder, baseball is not about the umpire— something that Hernandez seemed to have forgotten.

He debuted a strange hand signal to indicate the count. For some reason he swung it around as if he was at a rap concert or trying to imitate the flight of a butterfly.

Angel Hernandez, dancing behind the plate

At the end of the game, his final count for missed calls was truly impressive in the worst way.

Umpire Angel Hernandez missed 16 calls on the night. Two of them were called balls that should've been strikeouts.

The first to Orlando Arcia and the second to Cesar Hernandez.#National #Braves pic.twitter.com/WgE8Cr3S23

It does not look like year 31 is going to be any different for Hernandez. New year, same story.