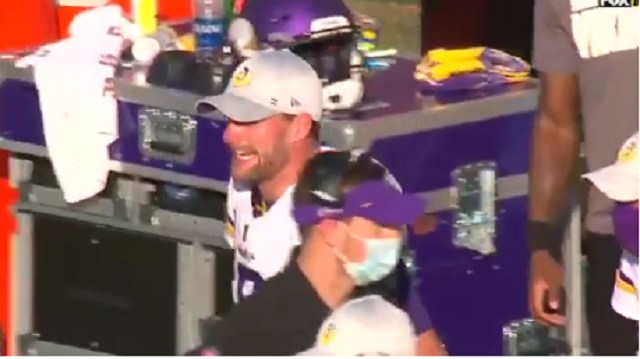 The Tampa Bay Buccaneers defensive line absolutely dominated the Minnesota Vikings on Sunday and Kirk Cousins was not happy about it.

While down 12 points late in fourth quarter, Cousins attempted to get his team back in the game but was strip-sacked by Jason Pierre-Paul in what ended up being the Bucs sixth sack in the game.

A frustrated Cousins got heated and began yelling on the sideline after the play.

Kirk Cousins was frustrated on the bench after getting sacked for the 6th time today. pic.twitter.com/X5A4fPPXu0

Vikings fans thought Cousins had every right to be mad at the team’s o-line on Sunday.

He has every right to be, dude is pressured every drop back because of this shit offensive line. Oh yeah, fuck dan bailey too. https://t.co/A3XmUNhKG8

Good. Tear into your line after this game. Pathetic performance https://t.co/JMziwRW92r

Vikings O-Line has been trash for years now. What is new? https://t.co/ROR2FxRrOA