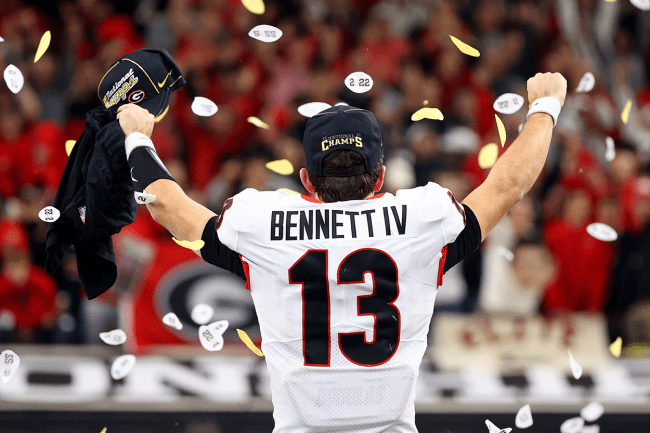 Stetson Bennett IV is a legend in Athens, Georgia for the rest of time. He will never have to pay for another meal again and he will be held as a god in the eyes of Bulldog fans.

However, one SEC coach says that Bennett’s return to Georgia in 2022 is actually a bad thing for the program.

Bennett, who had a wild journey to the starting job, left high school as a two-star recruit. He received just a handful of scholarship offers from non-Power Five programs but chose to walk-on at Georgia instead.

From there, he spent his first year on the practice squad before moving down to the JUCO level, lighting it up, and returning to Athens on scholarship. From there, he battled for the starting job in back-to-back years and ultimately took over as QB1 last fall because of an injury to J.T. Daniels.

Even as the Bulldogs went undefeated in the regular season and lost only the SEC Championship, college football fans both in and outside of Georgia thought that he should be replaced by either Daniels or freshman Brock Vandagriff should have started in Bennett’s place. Obviously, after winning the school’s first national championship in more than four decades, he silenced any and all doubt.

As a result, he decided to forgo the NFL Draft and exhaust his final year of eligibility. Stetson Bennett is running it back.

While a national championship quarterback returning for another year might seem like a good thing, there is a lot of talent behind him. Bennett may not be the best quarterback on the roster. Vandagriff was highly-touted out of high school, Carson Beck was a four-star recruit with high upside, and true freshman Gunner Stockton was a four-star guy in the Class of 2022.

But Bennett will be the starter. He has earned that right.

According to an anonymous SEC coach who spoke to Athlon Sports, that is actually a bad thing for Georgia. He doesn’t think Bennett is as good as a national championship win might indicate.

“The quarterback is back, but one of the worst things that can happen after a successful season or a title run is when a good-but-not-great QB comes back. Everyone is expecting an advancement that might not be possible. Remember, there were times last season they won in spite of this offense.”

This anonymous coach is not the only one thinking it. Some, if not many Georgia fans might even agree. Beck, Vandagriff and Stockton may all be better, and Bennett’s return might hinder their ability to reach the starting lineup and may lead them to transfer down the road. Only time will tell.

In the meantime, little does the anonymous SEC coach know, it’s not Stetson anymore— it’s Stequavious.