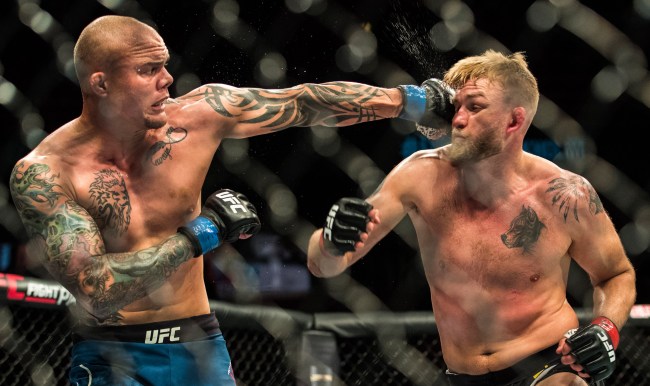 Anthony Smith, the number three ranked fighter in the UFC light heavyweight division, scored an impressive win at UFC Fight Night Stockholm over Alexander Gustafsson on Saturday, but he paid a steep price for the victory.

While Smith was able to submit Gustafsson with a rear naked choke in the fourth round, sending “The Mauler” into retirement, he fought much of the fight with a broken left hand after landing a punch in the second round.

“I think I jinxed myself. That’s what I get and that’s what my fiancée said ‘well I guess you asked for a break, it’s what you get I suppose’,” Smith told MMAFighting.com’s Damon Martin on Monday. “So I had the doctor’s appointment today, I have surgery on Wednesday morning and they said probably four months before I can fully start a training camp. That’s the best guess they have right now.

As for what happened during the fight when he broke his hand, Smith says not only did he feel it pop, he heard it.

“Paul Felder actually said something about it on the broadcast. I landed a nasty, nasty left hook and Alex ducked his head and he took it right on top of his forehead. That’s where you want to take it if you’re going to take one,” recalled Smith.

“If you get a chance, go back to that moment and listen to it. You can hear the bone break. It’s loud. It’s really loud. You can hear it. That’s when Felder said ‘I hope Anthony didn’t hurt his hand’ and unfortunately that’s when it happened. I knew right away that it was broken.”

On Wednesday, Smith had surgery to repair his broken left hand and shared a photo of the metal rod that was inserted into it, and it looks like something straight out of The Terminator.

Flew deep into enemy territory. Broke my hand in the 2nd round. Still performed against the odds. Whatever it takes. I finish fights. #LIONHEART pic.twitter.com/ioShuyHrgO

Smith said at first his hand didn’t feel too bad, but then the pain became “terrible.”

“Honestly, I told Marc [Montoya] right away, I said ‘I broke my hand’ and he said ‘all right well then we’re throwing elbows’. I said ‘nah f—k it, I’ll just keep throwing it’,” Smith told Martin. “That’s my mentality. I’m here, I’m hurt, let’s just fight. I’m not going to break it any more [than it’s already broken]. I knew in my head I was going into surgery so I was just like let’s go. I didn’t want it to change my mentality.”

Smith, now 32-14 in his MMA career, says that when he does return from his hand injury he will be looking for a rematch with UFC Light Heavyweight Champion Jon Jones – the man he lost to at UFC 235 back in March.