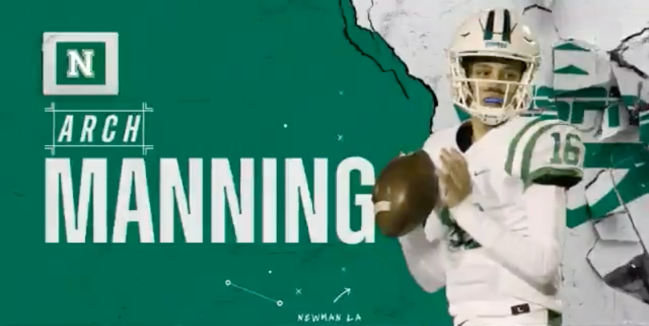 Despite taking a loss, Arch Manning played one of his best games of the season on Friday night and there was a special guest in attendance. Manning, who is the most highly-scrutinized recruit in recent history, went 18-of-35 for 213 yards with a touchdown through the air.

He did, however, throw two interceptions, but neither was particularly his fault.

The 6-foot-4, 215-pound junior and Isidore Newman were simply outmatched by Florida powerhouse Berkeley Prep and lost 40-24 on national television. Despite the scoreboard and turnover woes for Manning, he played about as well as he could.

Midway through the first quarter, Manning took an option keeper up the middle and went streaking. He went 69 yards to the house and looked a lot like his grandpa Archie with the wheels.

ARCH MANNING TO THE HOUSE 💥 pic.twitter.com/Q6FAyThtRm

With his team on a bye week, there was an important college coach on the sideline for the second week in a row. Georgia head coach Kirby Smart was in New Orleans for the game and liked what he saw from the nation’s top prospect in the class of 2023.

In fact, he was so excited about the run that he ended up a few yards onto the field as his hopeful future quarterback crossed the goal line.

Arch Manning just turned on the jets for a 68-yard TD run that brought Kirby Smart on to the field. pic.twitter.com/hQACBkm9D8

As Manning tried to will the Greenies back to victory, he certainly did his best. The 16-year-old is always able to make something out of nothing.

Newman with a nice drive here in the third quarter, highlighted by this wizardry from Arch Manning right here@SIAllAmerican pic.twitter.com/gX9sVxTIeq

He also always knows where to throw the ball without hesitation.

Newman showing some fight. Down 35-10, Greenies have scored two unanswered touchdowns to close the third quarter

Here are some of his highlights from the night:

Neman head coach Nelson Stewart had some high praise for his quarterback.

… it was the finest game I’ve seen Arch Manning play,” he said. “I’ve never seen him do what he did tonight against a physically superior opponent.”

As for the two interceptions, neither were red flags.

Manning tried to throw his receiver open on the first pick. A college pass-catcher might have been able to make a play.

Arch Manning tries fitting one over a DB but get picked off pic.twitter.com/5PoOZzWGAb

His second was just a total fluke.

This was a wild INT. Arch Manning's 2nd of the game. pic.twitter.com/V1deWLtyhs

Although Smart was on the sideline on Friday, Manning’s attention will turn to another school on Saturday.

He will be in attendance as Ole Miss retires his uncle Eli’s number during its game against LSU. The ceremony was scheduled for 2020 but was postponed due to COVID-19.

As the Rebels take the field against the Tigers, Arch’s last name will be brandished in the end zones:

It is quite the wild weekend for Arch and things will only get crazier as he gets closer to a decision.