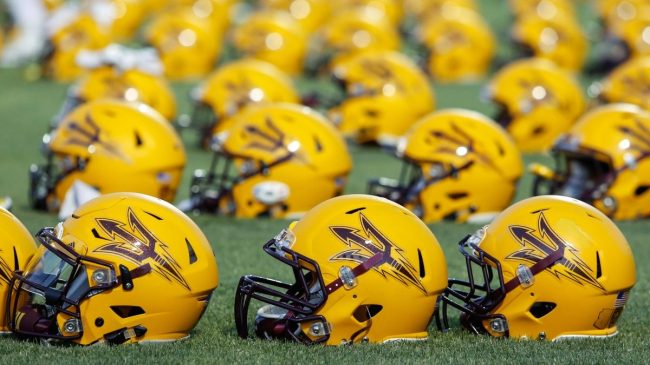 After Herm Edwards’ reign as the head coach came to a crashing halt, the Arizona State Sun Devils have been in search of a new leader. It sounds like the college football program found the man for the job, as they’re set to hire Kenny Dillingham. However, the Sun Devils make college football history, as the former Oregon Ducks offensive coordinator is incredibly young.

According to ESPN College Football, Arizona State’s hiring of Kenny Dillingham makes him the youngest head coach in a Power 5 conference in history. At just 32 years old, Dillingham finds himself as the next coach of the Sun Devils moving forward.

We’ll see how it plays out for this program. Arizona State has been hungry for success for some odd years now. Football seems to have gone in a younger direction when it comes to head coaching hires lately and the Sun Devils are following suit.

Kenny Dillingham was the offensive coordinator for the Florida State Seminoles for two years before heading to Oregon. He has a solid track record, as teams across the nation have had their eye on him. However, he’s heading to Arizona State where he began his coaching career as an offensive assistant in 2014-2015.

Although the Ducks are failing to make the College Football Playoffs this year, the offense played well for the most part. If Kenny Dillingham can bring that to Arizona State, then the Sun Devils could make some serious noise next season.