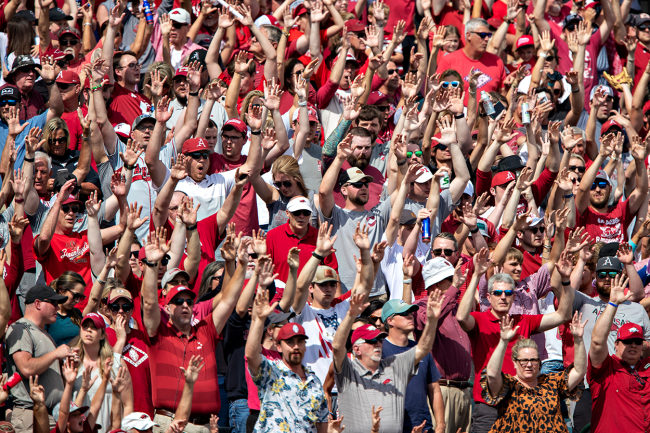 Rocco’s Pizza & Cantina in Omaha, Nebraska is making a fortune off of the SEC West this week— specifically Ole Miss and Arkansas. As the College World Series continues to play out at Charles Schwab Field, a ridiculously profitable Jell-O shot competition has broken out across the street.

The amount of shots that have already been consumed after just three days is truly insane.

Rocco’s, which is located directly across the street from the College World Series, started the ‘JELLO SHOT CHALLENGE’ a few years back. It gained significant notoriety through social media last year. Now it’s become even bigger than the bar could have ever imagined.

Every fanbase in the College World Series competes to consume as many Jell-O shots as possible.

Mississippi State won the national championship in 2021. That allowed Bulldogs fans an entire week+ to set the all-time record of most Jell-O shots by a fanbase at 2,965.

After Sunday night, that record no longer stands. It took only three days for it to go down.

The 2022 College World Series began on Friday. Arkansas fans got off to an astonishing pace.

When game day rolled around on Saturday, Ole Miss fans caught up quickly. It was a two-school race amongst the two SEC West rivals.

By the end of Day 2, the record was in serious jeopardy as the Rebels and Razorbacks went up over 2,000.

Neither school took the field at Charles Schwab on Sunday. That led to a slower start at Rocco’s.

However, despite the day off, both fanbases made their way to the bar by the afternoon. Mostly Arkansas fans with money to spend.

And that’s exactly what they did. After just three days — half the time of Mississippi State in 2021 — the Razorbacks set the record on Sunday night.

Through 72 hours, Arkansas fans consumed 3,416 Jell-O shots. Ole Miss is about 700 back in second place.

They celebrated as only the Hogs can.

At $4.50 per Jell-O shot, the bar is marking up each shot by about 350%, but they are apparently one of the better deals in Omaha. Taking the cost at face value— Rocco’s has made $35,649 in two days. Absolutely insane. Woo Pig.