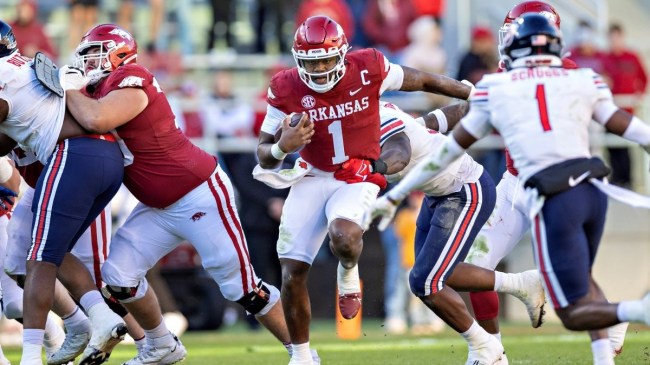 The 2022 college football season hasn’t exactly lived up to the expectations for the Arkansas Razorbacks and head coach Sam Pittman. The Razorbacks went 9-4 a year ago in just their second year under Pittman. And with star quarterback K.J. Jefferson back, expectations were sky-high in Fayetteville.

But things haven’t gone according to plan. Jefferson has been banged up for most of the season and the Razorbacks have been inconsistent on both sides of the ball. They entered Saturday’s contest with surging LSU at 5-4 and on the outside looking in at the top 25.

To make matters worse, Jefferson is out due to a number of nagging injuries, including a bruised clavicle. So third-year quarterback Malik Hornsby was called in to make his first career start. Hornsby came to Arkansas as a highly touted, four-star prospect out of Texas in the class of 2020. But Jefferson’s impressive play has thus far kept him out of the lineup.

Now he’s finally getting a chance to see what he can do. Though he’ll have to do so in less-than-ideal conditions.

Fayetteville received a nice dusting of snow overnight that coated the field at Donald W. Reynolds Razorback Stadium. Now, snow in Fayetteville isn’t overly common. But it’s particularly uncommon at this time of year. So the Arkansas grounds crew had a little bit of trouble figuring out how to clear the field.

This was the idea that they came up with…

Wait, did I just hear that Arkansas grounds crew sprayed WATER on the ice and snow to try to melt it this morning? Is that a thing?

Now, I know some of y’all aren’t super used to snow. As someone who has lived in the north their entire life, I can promise you that you’re not missing anything. But one thing you don’t do to clear snow is to ADD WATER. This isn’t powdered Gatorade! Do you know what happens when water gets cold? It freezes!

Fans couldn’t believe what they had just heard.

Ok, wait. Katie George reported the Arkansas University grounds crew sprayed water on the ice and snow that had accumulated on the field thinking the water would melt the ice and snow. “It backfired and made thing worse…”. Let me think back to my science classes 1/2

Arkansas’ grounds crew tried to use water to unfreeze the field, not thinking it would refreeze and make it worse? I’ve lost all hope in humanity

Wait, the Arkansas grounds crew tried to clear up a frozen field by spraying water on it? I get that being from the north means my relationship with frozen water is a bit different, but geez.

Only in the SEC