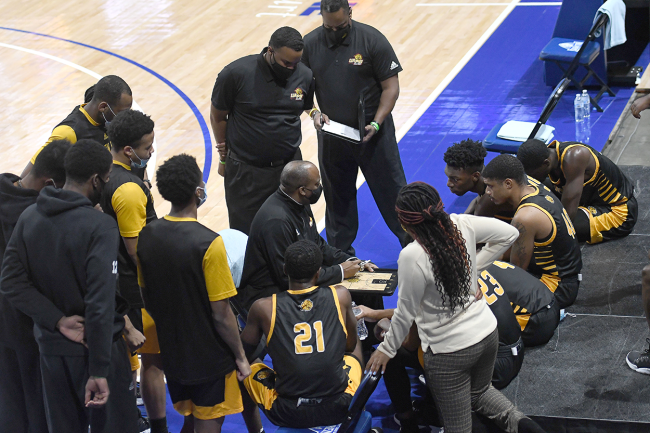 Needless to say, there are a lot of issues to be fixed before APB can have any semblance of success.

As a result, head coach Solomon Bozeman decided to take an interesting, very unique approach to try and light a fire under his team. The Golden Lions fell behind 22-38 at halftime and things did not turn around after the break.

Less than a minute and a half into the second half, Iowa State pushed its lead to 20. After a Tyrese Hunter runout made the score even more lopsided, Bozeman called a timeout with 18:19 left on the clock.

Instead of having his team huddle around him for a motivating speech, he had them lineup on the baseline.

He then made them run sprints. Mid-game.

While this may seem like a hilarious move, because it is, it will not affect his team’s conditioning. There is no need to get all up-in-arms over Bozeman making his players run during the game.

It’s undeniably unorthodox, but it sends a message. If Bozeman’s players won’t hustle to defend the fastbreak while the ball is in play, then he’s going to make them hustle during a stoppage.

In some ways, the move actually worked. Arkansas Pine-Bluff went on to win the remaining 18 minutes of the game 40-39, but lost the entire game by 19.

The Golden Lions have both Texas and Baylor on the horizon. Perhaps Bozeman will turn to his sprint strategy against the Longhorns and Bears?