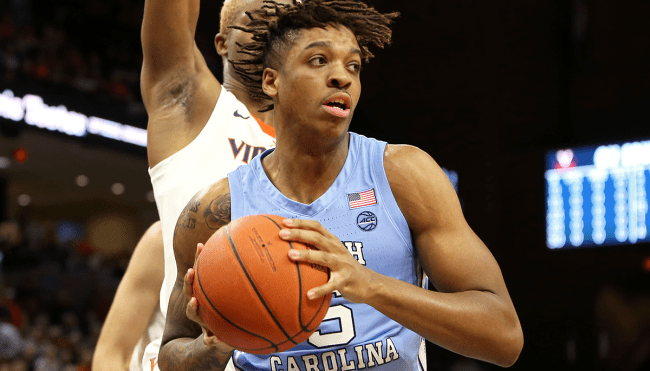 Over the course of his first two seasons playing forward at the University of North Carolina, Armando Bacot has averaged a respectable 10.9 points per game and can be counted on to record eight rebounds and a block over the course of a typical contest.

While those numbers may not turn many heads, the same cannot be said for a photo the 6’10” basketball player posted on Twitter as the Tarheels gear up to kick off their season in November, as it would appear Bacot did not skip arm day while getting in shape for this year’s campaign.

On Wednesday, the junior shared a picture that was snapped during a team photo shoot, and it was impossible to ignore the impossibly large nature of the arms he flexed while striking a pose.

It didn’t take long for the photo to start making the rounds on Twitter, as plenty of users chimed in with astonished reactions and hilarious comparisons.

he built like a smackdown vs raw 2011 created character https://t.co/r2Q2cxsLE0

This man said get back you don’t know him like that pic.twitter.com/eoEHsGg3gv

Dude looks like Popeye if he OD’d off the spinach 😂 https://t.co/UzOjnxQHUP

NCAA bout to hit this man with drug tests every week. https://t.co/kR2fHgTu5H

Bacot seemed pretty entertained by the responses and subtly addressed people who suggested some illicit substances played a role in his unreal gainz by implying the all-you-can-eat buffet at Jimmy’s Seafood was a key factor.

@JimmysSeafood getting me too big 😂😂😂

He’s lucky North Carolina is an open-carry state, because plenty of others would require a license to walk around with guns like that.