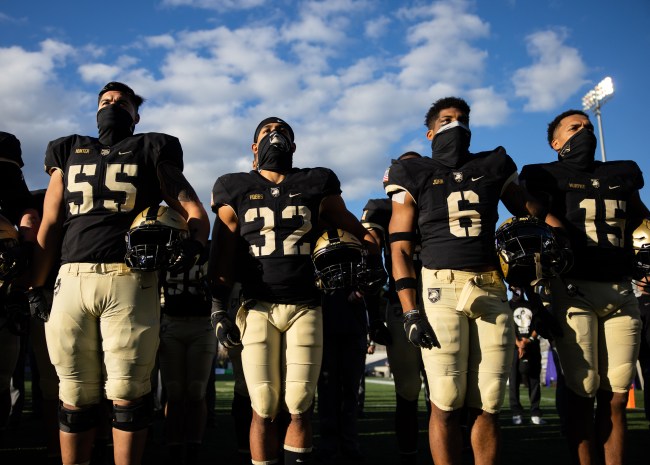 Just a few days removed from Veteran’s Day, Tulane did not respect the troops and handed Army its second loss of the season on Saturday. The Green Wave hopped out to an early 14-0 lead in the first quarter but went to the locker room at halftime ahead 14-12. Those were the only points of the game for the Black Knights, who were shutout in the second half. With the game all but out of reach, it would have taken a miracle for the comeback upset to happen, and Army tried to summon an act of God on a kickoff return with under five minutes left in the game.

Trying to throw the lure the defense to the left sideline and throw the ball back across the field for an open lane on the right, the lateral attempt didn’t go as planned. It was intercepted and Tulane scored to put the game away.

This could not have gone any worse for Army 😅 #SCNotTop10 pic.twitter.com/zahn8dHofY

First of all, shoutout to the Green Wave for having the coolest mascot logo in sports.

The ball is kicked and the Black Knights receive it near the left pylon.

Army pulls its blocking scheme in front of the return man, as is typical of a left-side return. It actually looks like there is enough of a wall to set a ball and have a decent return if the play goes by the book.

Nope. TRICK PLAY!!!!! The ball is thrown back across the field intended for the player waiting at the arrow on the left. Instead, the Army blocker at the right arrow missed a block and lets the defender next to him jump the route.

Jump the route he does indeed, leaving nothing but the end zone in front of him.