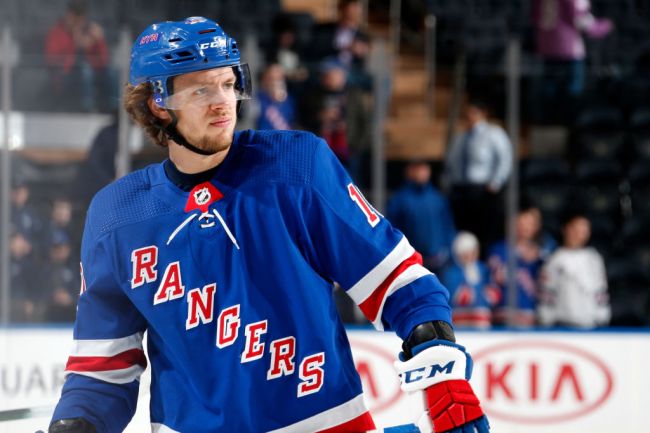 New York Rangers star forward and points leader Artemi Panarin is taking a leave of absence from the team after his former KHL coach alleged that he beat an 18-year-old girl in 2011. According to the New York Post, the allegations and situation could be politically driven.

Panarin’s former KHL coach Andrei Nazarov alleges that Panarin “sent the 18-year-old citizen of Latvia to the floor with several powerful blows” following a loss in December of 2011, according to ALhockey.ru. Nazarov claims that there was a bribe of 40,000 euros to keep the alleged story under wraps.

“Artemi vehemently and unequivocally denies any and all allegations in this fabricated story,” the Rangers said in a statement. “This is clearly an intimidation tactic being used against him for being outspoken on recent political events.

Nazarov, now the head coach of Neftekhimik Nizhnekamsk, is a known Vladimir Putin supporter, while Panarin is not. In the past, Nazarov has criticized Panarin’s beliefs opposing Putin and his regime.

The 29-year-old Panarin has been outspoken towards Putin over the last few years and last month posted a picture of Alexei Navalny to Instagram showing his support of Putin’s opposition leader. Panarin’s post of Navalny came shortly after the opposition leader shared a message on YouTube telling his supporters not to be afraid and to “take to the street” in protest.

Panarin, who signed his first NHL contract with the Chicago Blackhawks in 2015, tore into Putin during an interview with Vsemu Golovin in July of 2019. He did not hold back when discussing politics while sharing how it took him quite some time to realize something was wrong with Putin and Russia.

“Because I was never really interested in politics. Never read the news,” a translation from SlavaDoesAmerica.com reads. “I was thoroughly focused on hockey and my progress… Besides, it’s not like I crossed the [American] border and got enlightened right away.

“It took me something like two years before I thought, ‘Something is wrong [in Russia].’ I began feeling, with time, that at the end of summer I started to want to get back [to America].”

While it’s normal and almost expected to see American athletes give their opinions about politics and endorse government officials from both sides of the aisle, it’s extremely rare to see a Russian athlete speak out against Putin and the current political climate in Russia.