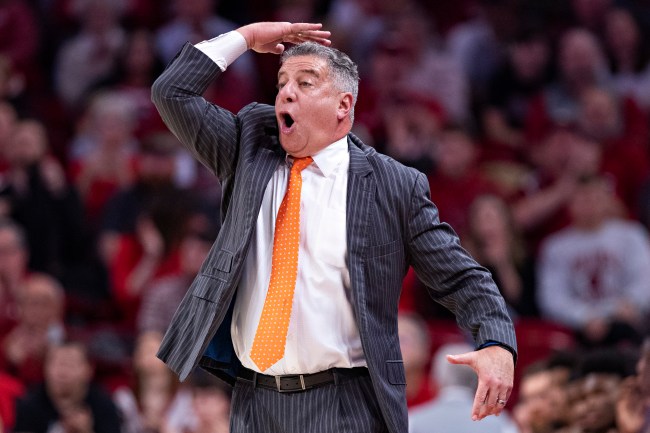 Auburn men’s basketball has self-imposed a postseason ban for this upcoming season, the school announced on Sunday. This is the first admittance of wrongdoing from the university amidst an investigation into bribery charges brought against former assistant coach Chuck Person.

Person, who joined head coach Bruce Pearl’s staff in 2014, plead guilty to accepting bribes to steer players to a financial advisor after being arrested in part of a massive federal investigation into college basketball. He was sentenced to community service and two years probation in 2019.

He was also accused of helping to play players. The United State government (yes, that U.S. government) is leading the investigation and alleges that he provided $11,000 to one player’s family and $7,500 to another.

“This was a difficult decision but the right decision,” Pearl said in a statement. “I hate it for our current players. They lost the opportunity for the postseason last year because of COVID, and now they will miss the postseason again. It’s a two-year postseason penalty for them. However, we need to take this penalty now to put it behind us.”

This sanction comes as the school’s second, after it self-imposed recruiting restrictions from September 2017 to April 2018. Auburn continues to cooperate and expects to be charged with rules violations by the NCAA.

Here’s the thing. Yes, this seems bad, and it is. It goes against everything that the NCAA has put in place, and the severity of the violations are large enough for the F.B.I. to get involved.

However, it’s common place. LSU is undergoing something similar after head coach Will Wade admitted to paying a player on a wiretap (amongst other violations), Arizona was recently hit with nine severe rules violations, Duke and Mike Krzyzewski have had the government look into their recruiting practices, and multiple other high-profile programs are included in the investigation.

HBO made a two-hour documentary on the rampant issues across the sport and it barely even cracked the surface.

To put it in the most simplistic sense, and it won’t even begin to explain the giant, tangled web of what’s going on— basketball players are receiving money in various ways to attend certain schools, NBA agents are signing deals to represent high-profile recruits before they graduate high school, and significant sportswear companies (Nike, Adidas, etc.) are funneling money into programs nationwide.

This is no secret, and the NCAA has turned a blind eye (and will continue to do so) for years, so long as the money keeps coming in. Recruits are being paid under the table. In basketball, in football, and every sport in between.

Auburn just got caught. And it’s not a “blue blood,” so they’re not untouchable. Let’s be real, Zion Williamson probably got a fat check, tons of gear and an agent while at Duke. Same goes for Josh Jackson at Kansas, Ben Simmons at LSU (we actually know this to be true, allegedly), and every five-star recruit in between.

Pearl has a history of NCAA violations throughout his career and it’s no shock that a run-of-the-mill Tigers team skyrocketed to a Final Four talent after he was hired. Morgan Freeman, a noted Ole Miss basketball fan, even joked about it during a game between the two teams. He once pulled a $20 bill from his pocket and offered it to Auburn’s shooting guard.

Money talks, and you have to pay to play in college basketball. Auburn is being made an example, and it deserves to be.

But is it really cheating if every other school is doing the same thing?