Auburn Fans Are Livid After Awful Call Against Alabama 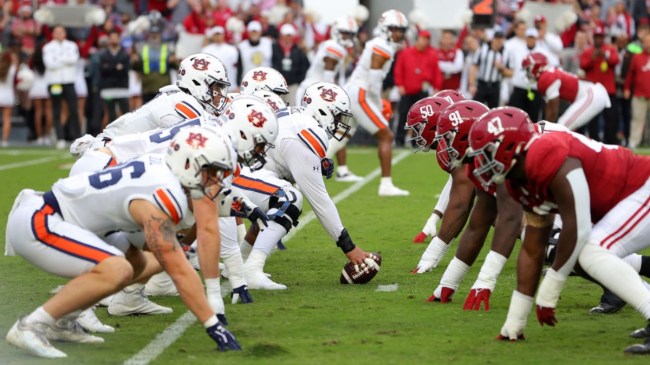 This year’s Iron Bowl had much lower stakes than most iterations of the rivalry game. Auburn entered the matchup needing a win to become bowl eligible. Alabama is just playing for a better bowl game after LSU handed them their second loss of the season to knock them out of College Football Playoff contention.

Despite the lessened stakes, fans were still plenty fired up about this game.

One call late in the 1st half managed to get Auburn fans particularly fired up.

The call came on an Alabama punt with the tide leading by 14 points. Auburn’s Keionte Scott called for a fair catch and attempted to field the punt, but it slipped through his hands. The refs ruled the play a fumble on the field and it was recovered by Alabama. They reviewed the play and stuck with the original call.

This was ruled as a fumble by Auburn, with the recovery made by Alabama

Did they get the call right? Did he ever touch the ball🧐

Despite the ruling, replays appear to show that the Auburn player never touched the ball.

This is a better angle blown up. It’s actually not even that close. Several inches of space between ball and hand. pic.twitter.com/AxPli7vOWT

Alabama would quickly score to extend their lead to 21 points before the half.

Auburn fans were livid with the ruling in favor of their rival.

One fan believes the SEC is trying to keep playoff hopes alive for as many of their teams as possible.

Another seemed absolutely certain that the ball wasn’t touched.